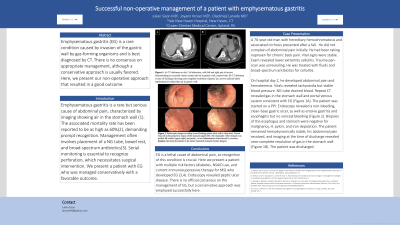 Introduction: The differential diagnosis for patients presenting with abdominal pain is broad. The differential includes emphysematous gastritis, a rare condition characterized by abdominal pain and imaging showing air in the stomach wall, best visualized via CT scan. The associated mortality rate has been reported to be up to 60%, demanding prompt recognition of this condition. Management of EG involves placement of a nasogastric tube, bowel rest, and broad-spectrum antibiotics. We present a patient with EG who was managed conservatively with a favorable outcome.

Case Description/Methods: A 70-year-old man with a past history of hereditary hemochromatosis with cirrhosis, diabetes, hypertension, and multiple sclerosis presented after a mechanical fall a few days prior to admission. He did not complain of abdominal pain, nausea/vomiting, or changes in bowel habits at the time. He had been taking daily naproxen for chronic back pain. Vital signs were stable and physical exam revealed bilateral lower extremity cellulitis. Trauma pan-scan was unrevealing for any acute process. He was treated with hydration and antibiotics for cellulitis.

On day 2, he developed abdominal pain and hematemesis. Vitals revealed tachycardia but normal blood pressure. Abdominal x-ray showed distention so a nasogastric tube was placed with bloody drainage. The patient was sent for repeat CT of the abdomen, which revealed gas in the stomach wall and portal venous system consistent with EG (Figure 1A). IV pantoprazole was started. Surgery recommended conservative management. Endoscopy revealed a non-bleeding, clean-base gastric ulcer, as well as gastritis and esophagitis but no varices (Figure 2). Biopsies of the esophagus and stomach were negative for malignancy, H. pylori, and iron deposition. The patient remained hemodynamically stable, his abdominal pain resolved after decompression, and imaging before discharge showed resolution of the stomach wall gas (Figure 1B).

Discussion: EG is a lethal cause of abdominal pain, making recognition of this condition crucial. Here we present a patient with multiple risk factors (diabetes, NSAID use, and current immunosuppressive therapy for MS) who developed EG (4,5). Endoscopy during this admission revealed peptic ulcer disease that was managed medically. There is no official consensus on the management of EG, but current thinking supports a conservative approach when possible. The patient reported here offers support for that paradigm as he was managed non-operatively with a favorable outcome. 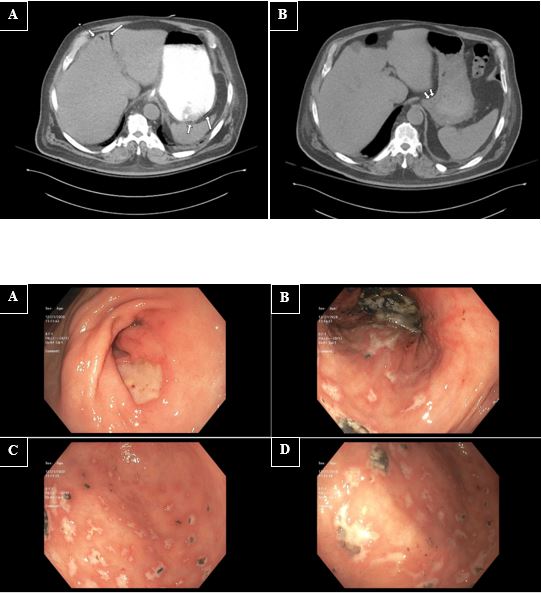 Figure: Figure 1. A) CT abdomen on day 2 of admission, with left and right pair of arrows demonstrating air in portal venous system and air in gastric wall, respectively. B) CT abdomen on day of discharge showing near-complete resolution of gastric air; arrows indicate likely intraluminal air rather than air in gastric wall.
Figure 2. Endoscopic images revealing a non-bleeding gastric ulcer with a clean base, Forrest Class III in the prepyloric region of the stomach (A). The remainder of the stomach was notable for residue (B) and patchy, severe inflammation characterized by erosions, friability and deep ulcerations in the entire examined stomach (C-D).