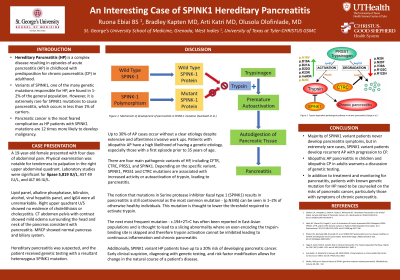 Introduction: Hereditary Pancreatitis (HP) is a complex disease resulting in episodes of acute pancreatitis (AP) in childhood with predisposition for chronic pancreatitis (CP) in adulthood. Variants of SPINK1, one of the many genetic mutations responsible for HP, are found in 1-2% of the general population. However, it is extremely rare for SPINK1 mutations to cause pancreatitis, which occurs in less than 1% of carriers. Pancreatic cancer is the most feared complication, and, sadly, HP patients are 12 times more likely to develop malignancy.

Discussion: Up to 30% of AP cases occur without a clear etiology despite extensive – and oftentimes invasive – work ups. However, patients with idiopathic AP have a high likelihood of having a genetic etiology (especially those with a first episode at less than 35 years of age). There are four main pathogenic variants of HP, including CFTR, CTRC, PRSS1, and SPINK1. A majority of SPINK1 variant patients never develop pancreatitis or symptoms, but in extremely rare cases, SPINK1 variant patients develop recurrent AP with progression to CP. Additionally, SPINK1 variant HP patients have up to a 20% risk of developing pancreatic cancer. Early clinical suspicion, diagnosing with genetic testing, and risk factor modification allows for change in the natural course of a patient's disease. Idiopathic AP pancreatitis in children and idiopathic CP in adults warrants a discussion of genetic testing.