P2142 - Small Cell Carcinoma of the Pancreas: Dilemma Between Primary or Metastatic Manifestation 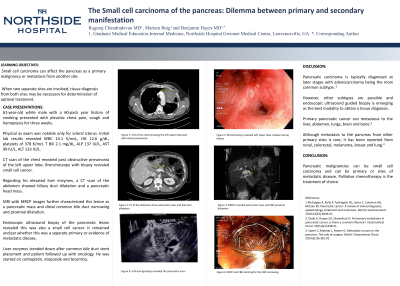 Introduction: Small cell cancer is an aggressive tumor with poor prognosis. Lung is the predominant site and affects other organs of the body including pancreas. We present a case where initially suspected to be primary lung cancer, however later turned out to be unknown primary site.

Discussion: Malignant lesions of the pancreas are not necessarily adenocarcinoma. Pancreatic carcinoma is typically diagnosed at later stages. Symptoms and signs mostly related to obstructive jaundice. Endoscopic ultrasound guided biopsy is the emerging modality for the diagnosis of pancreatic head tumors. Pancreatic cancer metastasis to liver, abdomen as well as lungs, brain and bone. Pancreatic metastasis from a primary malignancy is rare. It can be from kidneys, colorectal, melanoma, breast and lung. In our case presentation, there is no modality or diagnostic investigation to yield the primary site of the malignancy. However, the diagnosis needed tissues biopsies from both sites to prove the histological type of the cancer. This is very important to start chemotherapy as well as to relieve the biliary outflow by ERCP to avoid acute liver failure during chemotherapy. 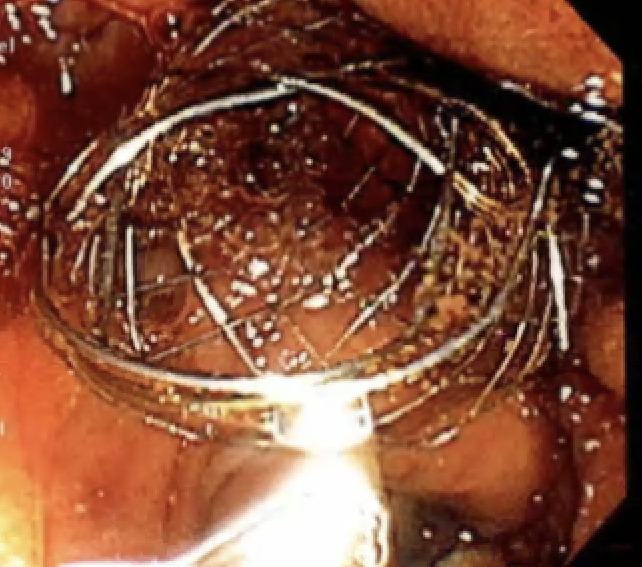 Figure: In stent dilatation of the Common bile duct during the ERCP procedure.