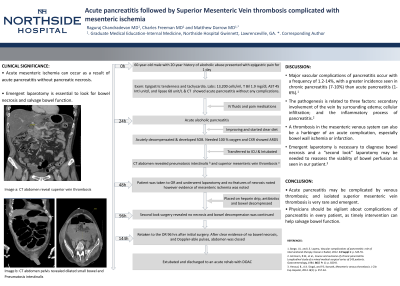 Introduction: Patients with severe pancreatitis may develop vascular complications such as isolated superior mesenteric vein thrombosis. This is rare but it can lead to bowel necrosis if not timely diagnosed and managed.

Case Description/Methods: A 60-year-old male with a history of alcohol abuse presented with one day of epigastric pain. He was tachycardic and had epigastric tenderness. Lab results revealed WBC of 13.2 K/mcl, T Bil 1.9mg/dl, AST 45 Intl unit/L and lipase of 68 unit/L. CT abdomen showed acute pancreatitis without any complications. Pancreatitis was attributed to alcohol and he was started on IV fluids and pain medications. A clear diet was started and pain his managed. He had improvement over 48 hours. Suddenly, he became dyspneic and needed a non-rebreather. A stat CXR was obtained that revealed bilateral ground glass infiltrates. He was transferred to the ICU with concern for ARDS. CXR partially visualized gaseous distention of the bowel, and further imaging was done. Abdominal XR showed persistent gaseous distention of the small bowel and repeat abdominal CT scan revealed acute pancreatitis with superior mesenteric vein thrombosis and pneumatosis intestinalis suggesting ischemia. He was stated on empiric antibacterial coverage and an IV heparin drip for mesenteric vein thrombosis. The patient was taken to the OR for emergent laparotomy which found evidence of ischemia in the middle jejunum, however there was no necrosis, and major arteries were patent. He remained intubated and his bowel was decompressed with an NG tube. His abdomen was left opened with a negative pressure vacuum for a later second look. After no clear evidence of necrosis, his abdomen was closed in two days. He was successfully extubated, though he remained in the hospital for another week before discharge to a rehab facility and ultimately home with DOAC therapy.

Discussion: Major vascular complications of pancreatitis occur with a frequency of 1.2-14%.[1] Pathogenesis is related to involvement of the vein by surrounding edema and an inflammatory process.[2] A thrombus in the mesenteric venous system can also be a harbinger of bowel wall ischemia or infarction and it is mostly found in the jejunum, as was the case in our patient.[3] Physicians should be vigilant about complications of pancreatitis as timely intervention can salvage bowel function. Emergent laparotomy is necessary to diagnose bowel necrosis and a “second look” laparotomy may be needed to reassess the viability of the bowel and assure perfusion.