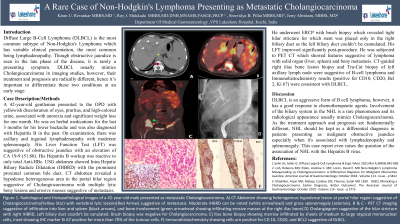 Introduction: Diffuse Large B-Cell Lymphoma (DLBCL) is the most common subtype of Non-Hodgkin's Lymphoma which has variable clinical presentation, the most common being lymphadenopathy. Though obstructive jaundice is seen in the late phase of the disease, it is rarely a presenting symptom. DLBCL usually mimics Cholangiocarcinoma in imaging studies, however, their treatment and prognosis are radically different, hence it’s important to differentiate these two conditions at an early stage.

Case Description/Methods: A 42-year-old gentleman presented to the OPD with yellowish discoloration of eyes, pruritus, and high-colored urine, associated with anorexia and significant weight loss for one month. He was on herbal medications for the last 3 months for his lower backache and was also diagnosed with Hepatitis B in the past. On examination, there was axillary and inguinal lymphadenopathy with moderate splenomegaly. His Liver Function Test (LFT) was suggestive of obstructive jaundice with an elevation of CA 19-9 (51.80). His Hepatitis B workup was reactive to only total Anti-HBc. USG abdomen showed Intra Hepatic Biliary Radicle Dilatation with the prominent proximal common bile duct. CT abdomen revealed a hypodense heterogeneous area in the portal hilar region suggestive of Cholangiocarcinoma with multiple lytic bony lesions and erosive masses suggestive of metastasis. He underwent ERCP with brush biopsy which revealed tight hilar stricture for which stent was placed only in the right biliary duct as the left biliary duct couldn’t be cannulated. His LFT improved significantly post-procedure. He was subjected to PET CT which showed features suggestive of lymphoma with solid organ (liver, spleen) and bony metastasis. CT-guided right iliac bone lesion biopsy and Tru-Cut biopsy of left axillary lymph node were suggestive of B-cell lymphoma and Immunohistochemistry results (positive for CD10, CD20, Bcl 2, Ki 67) were consistent with DLBCL.

Discussion: DLBCL is an aggressive form of B cell lymphoma, however, it has a good response to chemotherapeutic agents. Involvement of the biliary system in the NHL is a rare phenomenon and its radiological appearance usually mimics Cholangiocarcinoma. As the treatment approach and prognosis are fundamentally different, NHL should be kept as a differential diagnosis in patients presenting as malignant obstructive jaundice especially when it's associated with lymphadenopathy and splenomegaly. This case report even raises the question of the association of NHL with the Hepatitis B virus. 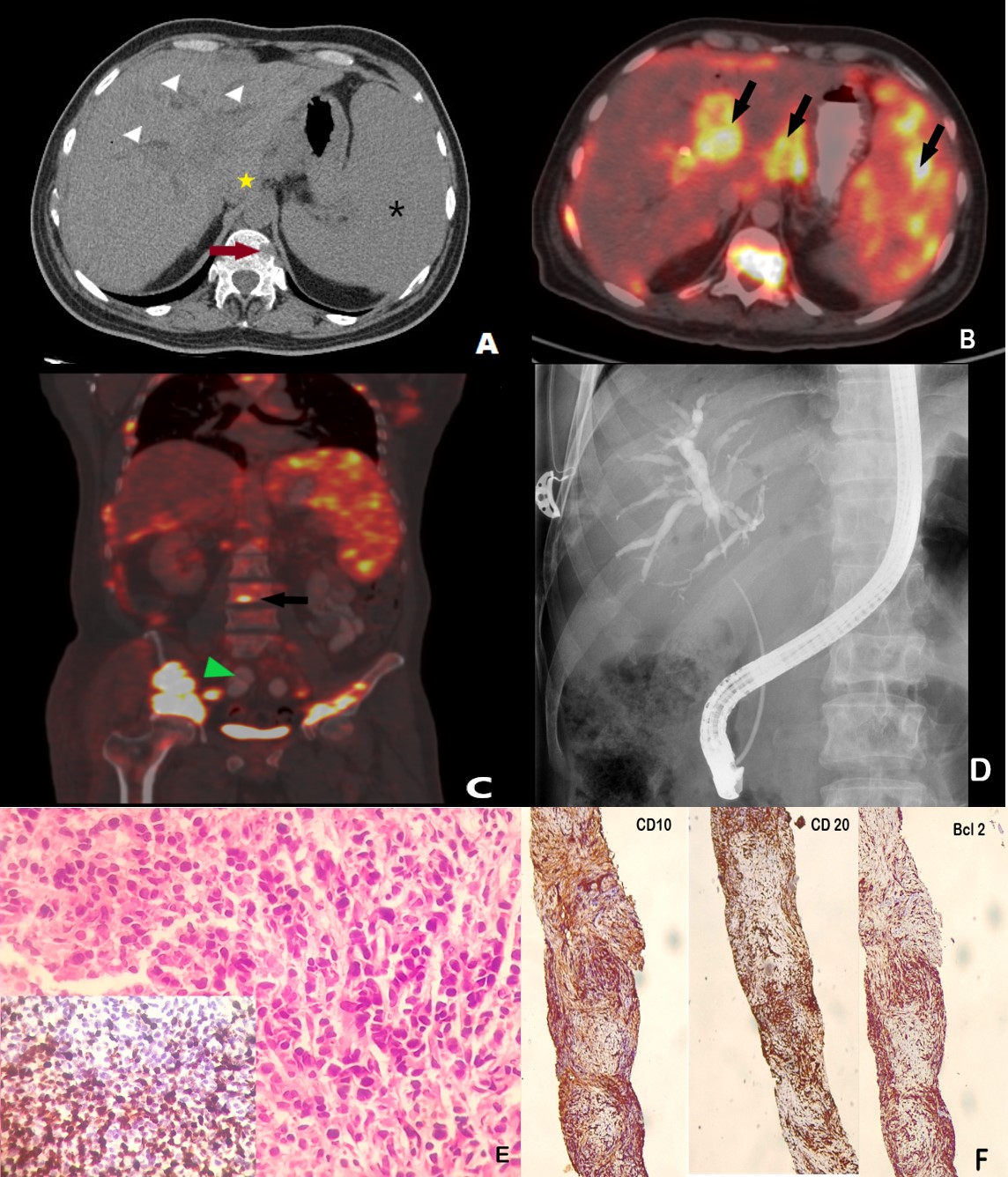