P2187 - IPMN Presenting as Gastrointestinal Bleeding and Fistula to the Duodenum 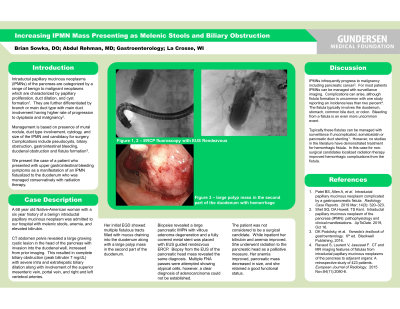 Introduction: Intraductal papillary mucinous neoplasm (IPMN) of the pancreas are characterized by papillary proliferation, duct dilation, and cyst formation. We present a unique case of a patient who presented with upper gastrointestinal bleeding symptoms as a manifestation of an IPMN fistulized to the duodenum which was managed conservatively with radiation therapy.

Case Description/Methods: A 68-year-old Native-American woman with a six-year history of a benign intraductal papillary mucinous neoplasm was admitted to our hospital with melena, anemia, and elevated bilirubin. Computerized Tomography scan of the abdomen pelvis revealed a large growing cystic lesion in the head of the pancreas with invasion into the duodenal wall, increased from prior imaging. This resulted in complete biliary obstruction (peak bilirubin 7 mg/dL) with severe intra and extrahepatic biliary dilation along with involvement of the superior mesenteric vein, portal vein, and right and left vertebral arteries. Initial EGD showed multiple fistulous tracts filled with mucus draining into the duodenum along with a large polyp mass in the second part of the duodenum. Biopsies revealed a large pancreatic IMPN with villous adenoma degeneration and a fully covered metal stent was placed with EUS guided rendezvous ERCP. Biopsy from the pancreatic head mass revealed the same diagnosis. Multiple FNA passes were attempted showing atypical cells, however, a clear diagnosis of adenocarcinoma could not be established. She was not considered a surgical candidate and underwent radiation to the pancreatic head as a palliative measure following which anemia improved, pancreatic mass decreased in size, and she retained a good functional status.

Discussion: IPMNs infrequently progress to malignancy including pancreatic cancer. Complications can arise, although fistula formation is uncommon with one study reporting an incidence less than two percent. The fistula typically involves the duodenum, stomach, common bile duct, or colon. This is a unique case in which patient presented with bleeding secondary to fistula formation. Typically, these fistulas can be managed with surveillance (if uncomplicated), somatostatin analogues or pancreatic duct stenting. However, no studies in the literature have demonstrated treatment for hemorrhagic fistula. In this case, being a non-surgical candidate, localized radiation therapy improved the hemorrhagic complications from the fistula.

Figure: (a), (b) ERCP fluoroscopy with EUS Rendezvous, (c) Large polyp mass in the second part of the duodenum with hemorrhage