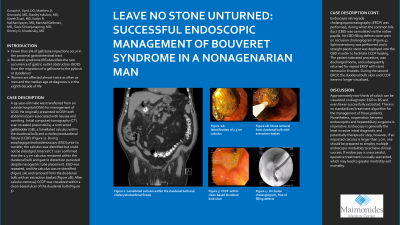 Introduction: Fewer than three percent of gallstone impactions occur in the proximal gastrointestinal tract. Bouveret syndrome (BS) describes the rare occurrence of gastric outlet obstruction (GOO) from the migration of a gallstone to the pylorus or duodenum. Women are affected almost twice as often as men and the median age at diagnosis is in the eighth decade of life. We present a case of a nonagenarian man who presented with GOO.

Case Description/Methods: A 93-year-old male was transferred from an outside hospital (OSH) for management of GOO. He originally presented to OSH with abdominal pain associated with nausea and vomiting. Initial computed tomography (CT) scan revealed pneumobilia, a contracted gallbladder (GB), a lamellated calculus within the duodenal bulb and cholecystoduodenal fistula (CCDF) (Figure 1). During esophagogastroduodenoscopy (EGD) prior to transfer, the calculus was identified but could not be dislodged. Interval CT scan confirmed that the 2.5 cm calculus remained within the duodenal bulb and gastric distention persisted despite nasogastric tube placement. EGD was repeated, and the calculus was re-identified (Figure 2A) and removed from the duodenal bulb with an extraction basket (Figure 2B). After calculus removal, CCDF was visualized within a clean-based ulcer of the duodenal bulb (Figure 3). Endoscopic retrograde cholangiopancreatography (ERCP) was performed, during which the common bile duct (CBD) was cannulated via the native papilla. No CBD filling defects were seen on occlusion cholangiogram (Figure 4). Sphincterotomy was performed and a straight plastic stent was deployed into the CBD in order to facilitate CCDF healing. The patient tolerated procedure, was discharged home, and subsequently returned for repeat ERCP with stent removal in 8 weeks. During the second ERCP, the duodenal bulb ulcer and CCDF were no longer visualized.

Discussion: Approximately two-thirds of calculi can be visualized on diagnostic EGD in BS and even fewer successfully extracted. There is no standardized treatment algorithm for the management of these patients. Nonetheless, cooperation between endoscopists and hepatobiliary surgeons is imperative. Endoscopy is generally the least invasive initial diagnostic and potentially therapeutic step, however, if impacted calculus is larger than 3 cm, one should be prepared to employ multiple endoscopic modalities to achieve clinical success. If endoscopy is unsuccessful, operative treatment is usually warranted which may lead to greater morbidity and mortality. 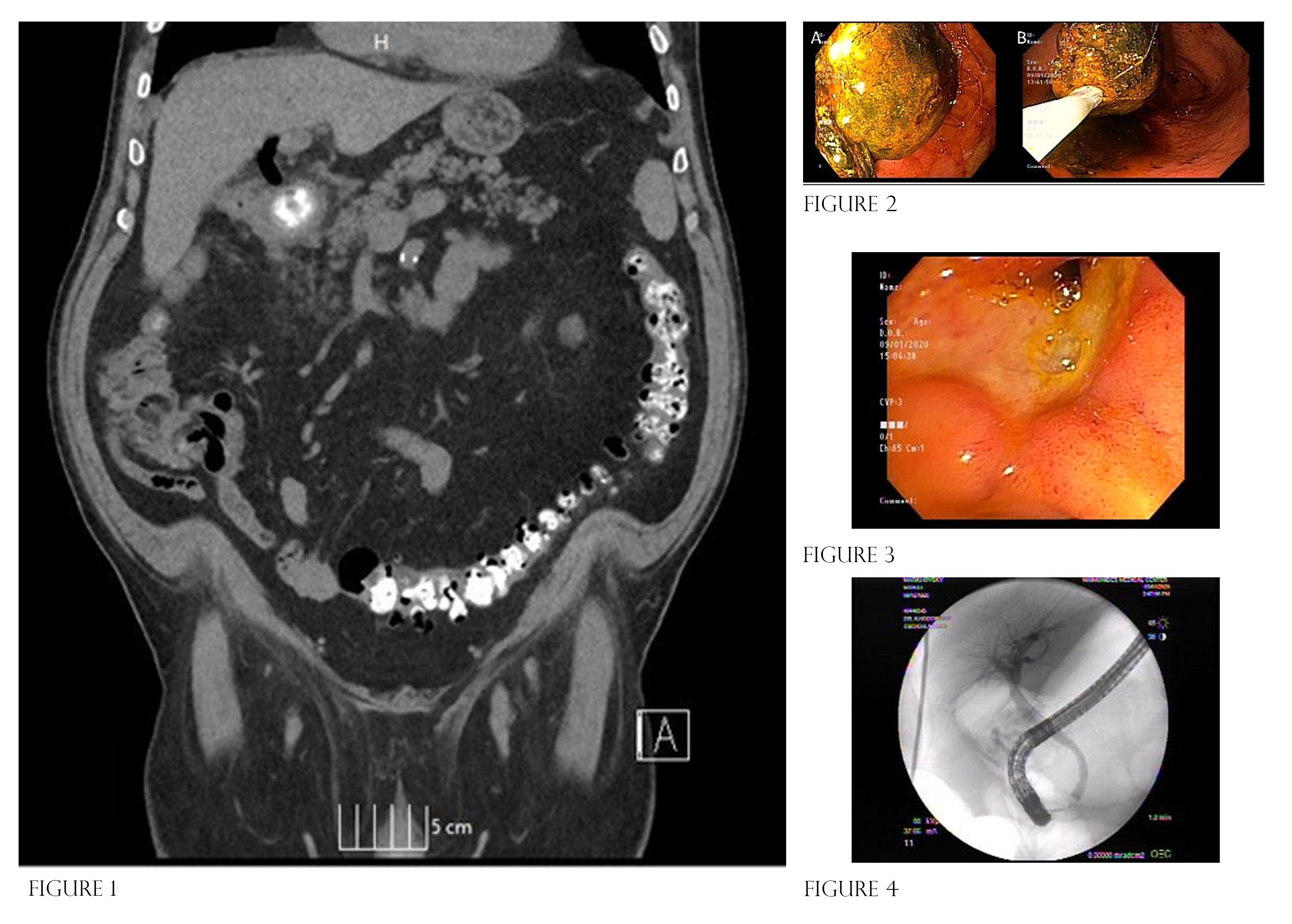