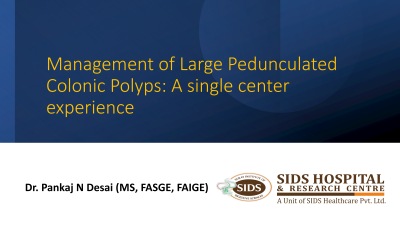 Discussion: Though there is consensus for management of sessile colonic polyps, data regarding management of pedunculated polyps, especially large polyps are scarce. Post polypectomy bleeding occurs in 0.3 to 6.1%. In our study age or polyp histology did not predispose to increased risk of post polypectomy bleed. Earlier reports reported late bleed to the tune of 13 to 18% for large polyps. However, in these reports dilute adrenaline injection at base was not used. We used either adrenaline injection or endoloop application at base before hot snare polypectomy.
We found no intraprocedural bleed with loop application and significantly lower late bleed in polyps with stalk size > 1.5 mm. We did not find transaction of stalk by loop as majority of stalk were thick with least stalk size of 8mm. Prophylactic clip placement after hot snare polypectomy was not done in any patient. In a randomized controlled trial, prophylactic clip placement did not decrease late bleeding after polypectomy.

Table: Table of Stalk Size and comparison of different modalities of excision