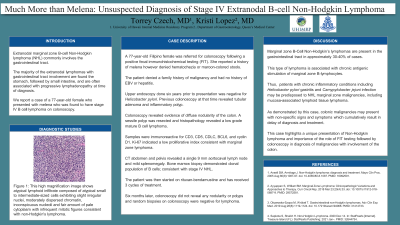 Introduction: Extranodal marginal zone B-cell Non-Hodgkin lymphoma (NHL) commonly involves the gastrointestinal tract. The majority of the extranodal lymphomas with gastrointestinal tract involvement are found the stomach, followed by small intestine, and are often associated with progressive lymphadenopathy at time of diagnosis. We report a case of a 77-year-old female who presented with melena who was found to have stage IV B cell lymphoma on colonoscopy.

Case Description/Methods: A 77-year-old Filipino female was referred for colonoscopy following a positive fecal immunohistochemical testing (FIT). She reported a history of melena however denied hematochezia or maroon-colored stools. The patient denied a family history of malignancy and had no history of EBV or hepatitis. Upper endoscopy done six years prior to presentation was negative for Helicobacter pylori. Previous colonoscopy at that time revealed tubular adenoma and inflammatory polyp.

The patient was then started on rituxan-bendamustine and has received 3 cycles of treatment. Six months later, colonoscopy did not reveal any nodularity or polyps and random biopsies on colonoscopy were negative for lymphoma.

Discussion: Marginal zone B-Cell Non-Hodgkin’s lymphomas are present in the gastrointestinal tract in approximately 30-40% of cases.

This type of lymphoma is associated with chronic antigenic stimulation of marginal zone B-lymphocytes and thus, patients with chronic inflammatory conditions including Helicobacter pylori gastritis and Camypylobacter jejuni infection may be predisposed to NHL marginal zone malignancies, including mucosa-associated lymphoid tissue lymphoma.

As demonstrated by this case, colonic malignancies may present with non-specific signs and symptoms which cumulatively result in delay of diagnosis and treatment. This case highlights a unique presentation of Non-Hodgkin lymphoma and importance of the role of FIT testing followed by colonoscopy in diagnosis of malignancies with involvement of the colon. 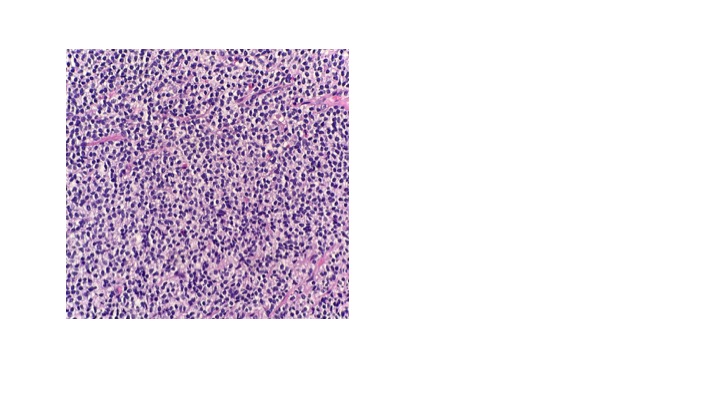