P2246 - Removing a Foreign Body From Ileum: What Happens When the Screw Does Not Come Out 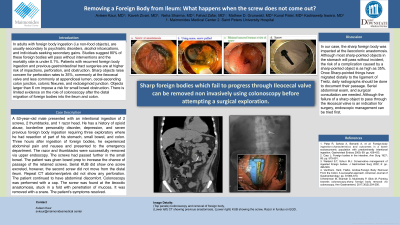 Introduction: In adults with foreign body ingestion (i.e non-food objects), are usually secondary to psychiatric disorders, alcohol intoxications, and individuals seeking secondary gains. Studies suggest 80% of these foreign bodies will pass without interventions and the mortality rate is under 0.1%. Patients with recurrent foreign body ingestion and previous gastrointestinal tract surgeries are at higher risk of impactions, perforation, and obstruction. Sharp objects raise concern for perforation rates to 35%, commonly at the ileocecal valve and less commonly at appendiceal lumen, cecal-ascending colon junction, colonic flexures, and rectosigmoid junction. Objects larger than 6 cm impose a risk for small bowel obstruction. There is limited evidence on the role of colonoscopy after the distal migration of foreign bodies into the ileum and colon.

Case Description/Methods: A 53-year-old male presented with an intentional ingestion of 2 screws, 2 thumbtacks, and 1 razor head. He has a history of opioid abuse, borderline personality disorder, depression, and seven previous foreign body ingestion requiring three exploratory where he had resection of part of his stomach, small bowel, and colon. Three hours after ingestion of foreign bodies, he experienced abdominal pain and nausea and presented to the emergency department. The razer and thumbtacks were successfully removed via upper endoscopy. The screws had passed further in the small bowel. The patient was given bowel prep to increase the chance of passage of the retained screws. Serial KUB did show one screw excreted, however, the second screw did not move from the distal ileum. Repeat CT abdomen/pelvis did not show any perforation. The patient continued to have abdominal discomfort. Colonoscopy was performed with a cap. The screw was found at the ileocolic anastomosis, stuck in a fold with penetration of mucosa. It was removed with a snare. The patient’s symptoms resolved.

Discussion: In our case, the sharp foreign body was impacted at the ileocolonic anastomosis. Although most sharp-pointed objects in the stomach will pass without incident, the risk of a complication caused by a sharp-pointed object is as high as 35%. Once Sharp-pointed things have migrated distally to the ligament of Treitz, daily radiographs should be done to document their passage. Serial abdominal exam, and surgical consultation are needed. Although the failure of a sharp object to pass through the ileocecal valve is an indication for surgery, endoscopic management can be tried first. 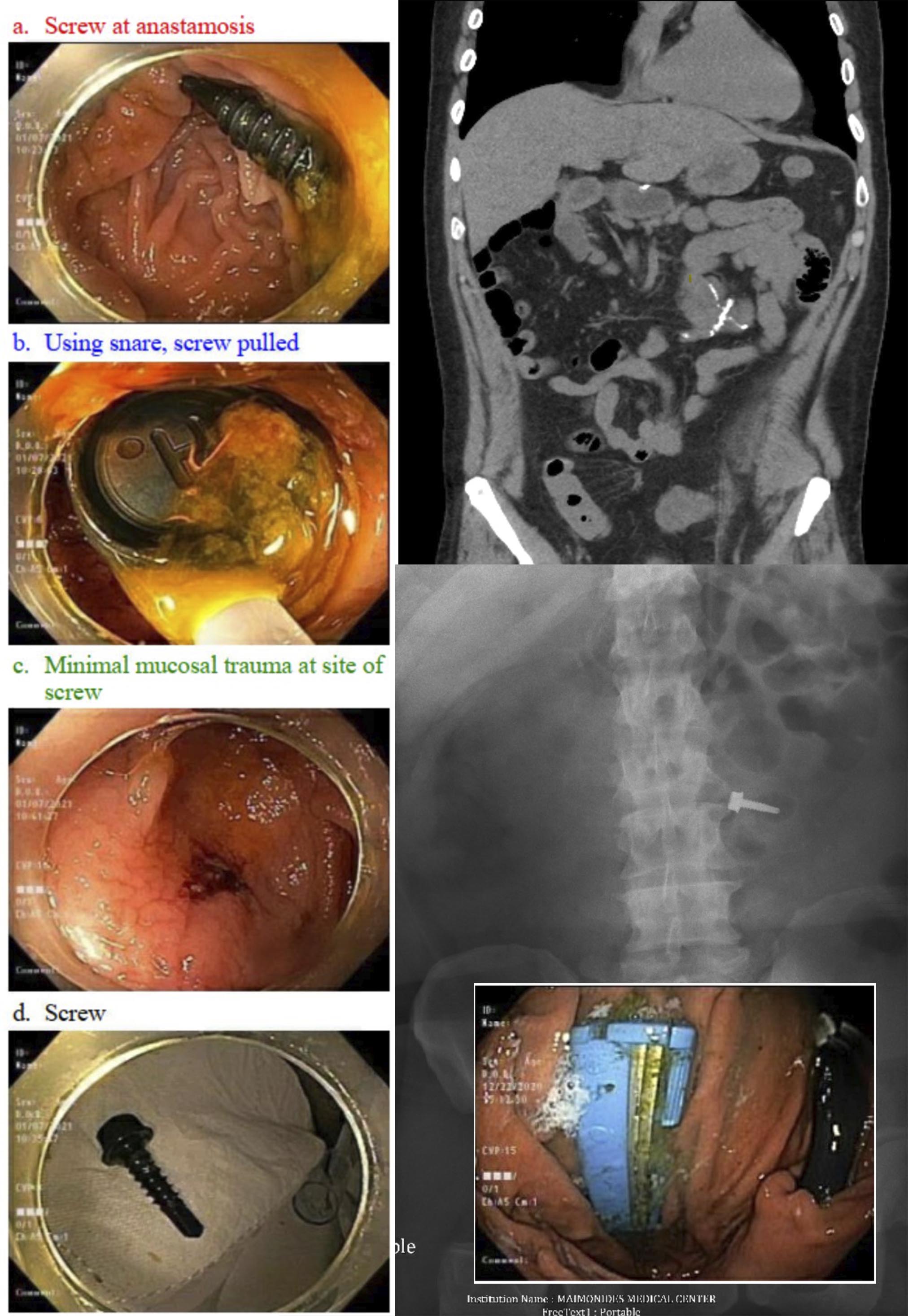