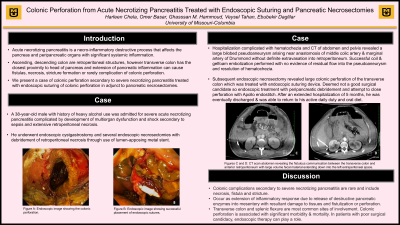 Case Description/Methods: A 38-year-old male with history of heavy alcohol use was admitted for severe acute necrotizing pancreatitis complicated by development of multiorgan dysfunction and shock secondary to sepsis and extensive retroperitoneal necrosis. He underwent endoscopic cystgastrostomy and several endoscopic necrosectomies with debridement of retroperitoneal necrosis through use of lumen-apposing metal stent. Hospitalization was complicated with hematochezia and need for blood transfusion. Computed tomography of abdomen and pelvis revealed a large bilobed pseudoaneurysm arising near anastomosis of middle colic artery & marginal artery of Drummond without definite extravasation into retroperitoneum. Successful coil & gelfoam embolization performed with no evidence of residual flow into the pseudoaneurysm and resolution of hematochezia. Subsequent endoscopic necrosectomy revealed large colonic perforation of the transverse colon which was treated with endoscopic suturing device. He was deemed not a good surgical candidate due to significant necrosis, sepsis, multiorgan failure. He underwent endoscopic treatment with peripancreatic debridement and attempt to close perforation with Apollo endostitch. After an extended hospitalization of 5 months, he was eventually discharged & was able to return to his active daily duty and oral diet.

Discussion: Colonic complications secondary to severe necrotizing pancreatitis are rare and include necrosis, fistula and stricture. It occurs as extension of inflammatory response due to release of destructive pancreatic enzymes into mesentery with resultant damage to tissues and fistulization or perforation. The transverse colon and splenic flexure are the most common sites of involvement. Colonic perforation is associated with significant morbidity & mortality. In patients with poor surgical candidacy, endoscopic therapy can play a role. 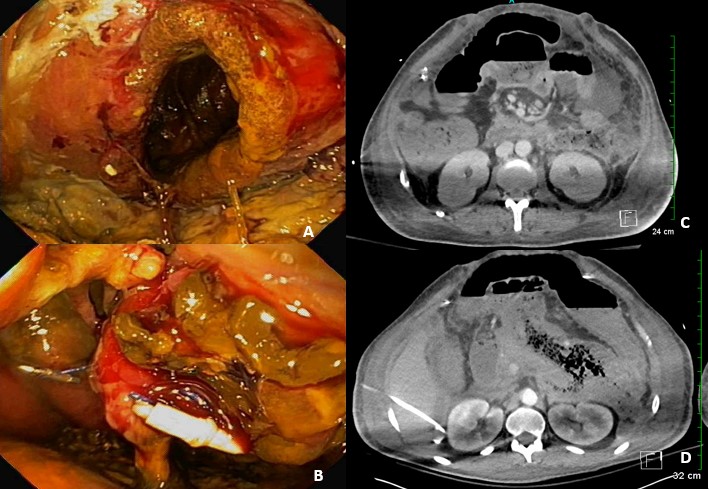