P2290 - Pancreatic Adenocarcinoma Presenting as Rectal Bleeding: A Case of a Deceitful Cancer During Deceitful Times 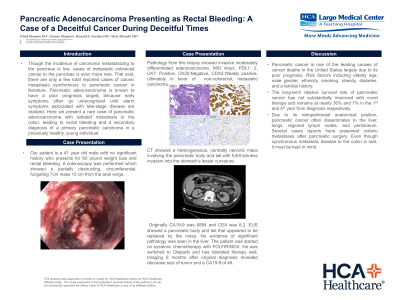 Introduction: Though the incidence of carcinoma metastasizing to the pancreas is low, cases of metastatic colorectal cancer to the pancreas is even more rare. That said, there are only a few total reported cases of colonic metastasis synchronous to pancreatic cancer in literature. Pancreatic adenocarcinoma is known to have a poor prognosis largely because early symptoms often go unrecognized until alarm symptoms associated with late-stage disease are realized. Here we present a rare case of pancreatic adenocarcinoma with isolated metastasis to the rectum, leading to rectal bleeding and a secondary diagnosis of a primary pancreatic carcinoma in a previously healthy, young individual.

Case Description/Methods: Our patient is a 41 year old male with no significant history who presents for 60 pound weight loss and rectal bleeding. A colonoscopy was performed which showed a partially obstructing, circumferential, fungating 7cm mass 10 cm from the anal verge. Pathology from this biopsy showed invasive moderately differentiated adenocarcinoma, MSI intact, PDL1: 2, CK7: Positive, CK20:Negative, CDX2:Weakly positive, ultimately in favor of non-colorectal, metastatic carcinoma. CT showed a heterogeneous, centrally necrotic mass involving the pancreatic body and tail,with full-thickness invasion into the stomach’s lesser curvature. Originally CA19-9 was 6884 and CEA was 8.2. EUS showed a pancreatic body and tail that appeared to be replaced by the mass. No evidence of significant pathology was seen in the liver. The ppatient was started on systemic chemotherapy with FOLFIRINOX. He was switched to Olaparib and has tolerated therapy well. Imaging 8 months after original diagnosis revealed decrease size of tumor and a CA19-9 of 46.

Discussion: Pancreatic cancer is one of the leading causes of cancer deaths in the United States largely due to its poor prognosis. Risk factors including elderly age, male gender, ethnicity, smoking, obesity, diabetes, and a familial history. The long-term relative survival rate of pancreatic cancer has not substantially improved with novel therapy and remains at nearly 30% and 7% in the 1st and 5th year from diagnosis respectively. Due to its retroperitoneal anatomical position, pancreatic cancer often disseminates to the liver, lungs, regional lymph nodes, and peritoneum. Several cases reports have presented colonic metastases after pancreatic surgery. Even though synchronous metastatic disease to the colon is rare furthermore metastatic disease to the rectum, it must be kept in mind. 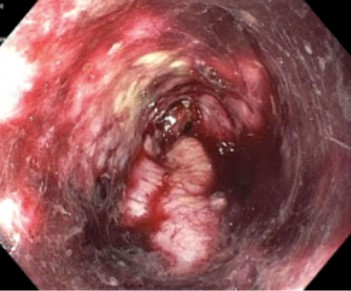 Figure: Pancreatic Metastasis to the Rectum