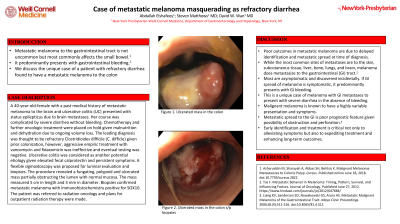 Introduction: Melanoma metastatic to the gastrointestinal tract is not uncommon, however it predominantly presents with bleeding. We discuss an unusual case of metastatic melanoma presenting as refractory diarrhea.

Case Description/Methods: A 40-year-old-female with a past medical history of metastatic melanoma to the brain and ulcerative colitis (UC) presented with status epilepticus due to brain metastases. Her course was complicated by severe diarrhea without bleeding. Chemotherapy and further oncologic treatment were placed on hold given malnutrition and dehydration due to ongoing volume loss. The leading diagnosis was thought to be refractory Clostridioides difficile (C. difficile) given prior colonization, however, aggressive empiric treatment with vancomycin and fidaxomicin was ineffective and eventual testing was negative. Ulcerative colitis was considered as another potential etiology given elevated fecal calprotectin and persistent symptoms. A flexible sigmoidoscopy was proposed for luminal evaluation and biopsies. The procedure revealed a fungating, polypoid and ulcerated mass partially obstructing the lumen with normal mucosa. The mass measured 5 cm in length and 3 mm in diameter. Biopsies confirmed metastatic melanoma with immunohistochemistry positive for SOX10. The patient was referred to radiation oncology and plans for outpatient radiation therapy were made.

Discussion: Poor outcomes in metastatic melanoma are due to delayed identification and metastatic spread at time of diagnosis. While the most common sites of metastases are to the skin, subcutaneous tissue, liver, bone, lungs, and brain, melanoma does metastasize to the gastrointestinal (GI) tract. Most are asymptomatic and discovered incidentally. If GI spread of melanoma is symptomatic, it predominantly presents with GI bleeding. This is a unique case of melanoma with GI metastases to present with severe diarrhea in the absence of bleeding. Malignant melanoma is known to have a highly variable presentation and symptoms. Metastatic spread to the GI is poor prognostic feature given possibility of obstruction and perforation. Early identification and treatment is critical not only to alleviating symptoms but also to expediting treatment and enhancing long-term outcomes. 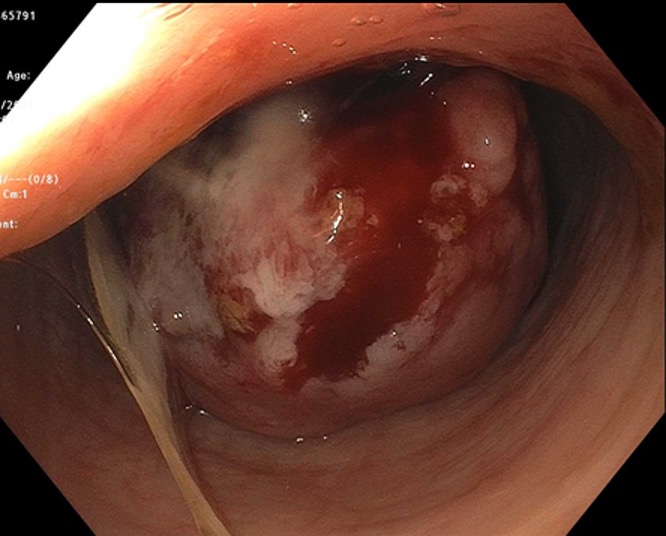 Figure: Fungating mass in the colon later found to be metastatic melanoma