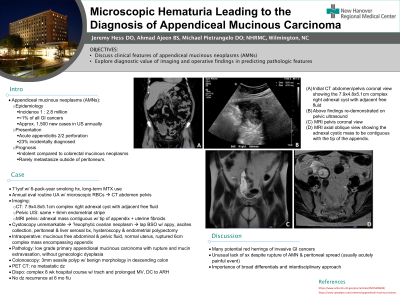 Introduction: Appendiceal mucinous neoplasms (AMNs) are an exceedingly rare gastrointestinal malignancy with in incidence of 2.8 cases per million, accounting for less than 1% of all GI cancers, and approximately 1,500 new cases in the US annually. AMNs typically present as acute appendicitis, given the predilection for appendiceal perforation, however as many as 23% are incidentally diagnosed. They are generally thought to be indolent compared to their colorectal counterparts and rarely metastasize outside of the peritoneum.

Case Description/Methods: A 71-year-old female with a 6 pack-year smoking history and long-term methotrexate use for lichen planus presented to her PCP’s office for her annual evaluation. Routine urinalysis at that time showed microscopic RBCs so CT abdomen/pelvis was ordered and showed a 7.9x4.8x5.1cm complex right adnexal cyst with adjacent free fluid. Subsequent pelvic ultrasound re-demonstrated the same plus a thickened 6mm endometrial strip. MRI pelvis was pursued and showed this large adnexal cystic mass to be contiguous with the tip of the appendix, in addition to multiple uterine fibroids. After an unremarkable cystoscopy, suspicions were raised for an exophytic ovarian neoplasm, so the patient proceeded with laparoscopic bilateral salpingo-oophorectomy, appendectomy, collection of pelvic ascites, peritoneal biopsies and liver serosa biopsy, hysteroscopy and endometrial polypectomy. Intraoperatively, the patient had a mucinous fluid covering her pelvic and abdominal cavity with normal appearing uterus, and a ruptured 6cm complex mass encompassing the appendix. Pathology revealed low grade primary appendiceal mucinous carcinoma with rupture and mucin extravasation, without gynecologic dysplasia. Colonoscopy was then done and only a 3mm sessile polyp with benign morphology was found in the descending colon. PET CT showed no evidence of metastatic disease. The hospital course was complication by septic shock with polymicrobial bacteremia requiring prolonged mechanical ventilation and tracheostomy. She was discharged to an acute rehab hospital around 8 weeks later, and at 6-month follow-up had no disease recurrence.

Discussion: Demonstrated is of the many potential red herrings observed in the evaluation of invasive GI cancers, emphasizing the importance of maintaining broad differentials and an interdisciplinary approach. Also unique was the lack of substantial symptoms despite rupture of said AMN and peritoneal spread - often an acutely clinically significant and painful event.

Figure: Initial CT abdomen/pelvis coronal view showing the 7.9x4.8x5.1cm complex right adnexal cyst with adjacent free fluid (A). This is re-demonstrated on pelvic ultrasound (B). MRI pelvis coronal (C) and axial oblique (D) views showing the adnexal cystic mass to be contiguous with the tip of the appendix.