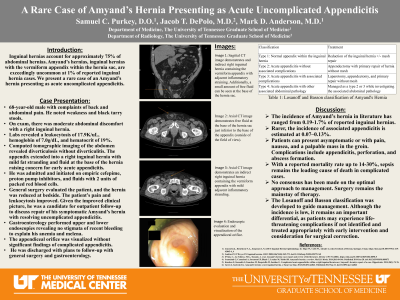 Case Description/Methods: We present a 68-year-old male with complaints of back and abdominal pain. He noted weakness and tarry stools. On exam, there was moderate abdominal discomfort with a right inguinal hernia. Labs revealed a leukocytosis of 17.9K/uL, hemoglobin of 7.0g/dL, and hematocrit of 19%. Computed tomographic imaging of the abdomen revealed diverticulosis without diverticulitis. The appendix extended into a right inguinal hernia with mild fat stranding and fluid at the base of the hernia raising concern for early acute appendicitis (Image 1,2,3,4). He was admitted and initiated on empiric cefepime, proton pump inhibitors, and fluids with 2 units of packed red blood cells.

General surgery evaluated the patient, and the hernia was reduced at bedside. The patient’s pain and leukocytosis improved. Given the improved clinical picture, he was a candidate for outpatient follow-up to discuss repair of his symptomatic Amyand’s hernia with resolving uncomplicated appendicitis. Gastroenterology performed upper and lower endoscopies revealing no stigmata of recent bleeding to explain his anemia and melena. The appendiceal orifice was visualized without significant findings of complicated appendicitis (Image 5). He was discharged with plans to follow-up with general surgery and gastroenterology.

Discussion: The incidence of Amyand’s hernia in literature has ranged from 0.19-1.7% of reported inguinal hernias. Rarer, the incidence of associated appendicitis is estimated at 0.07–0.13%. Patients can present asymptomatic or with pain, nausea, and a palpable mass in the groin. Complications include appendicitis, perforation, and abscess formation. With a reported mortality rate up to 14-30%, sepsis remains the leading cause of death in complicated cases. No consensus has been made on the optimal approach to management. Surgery remains the mainstay of therapy. The Losanoff and Basson classification was developed to guide management (Table 1). Although the incidence is low, it remains an important differential, as patients may experience life-threatening complications if not identified and treated appropriately with early intervention and consideration for surgical correction. 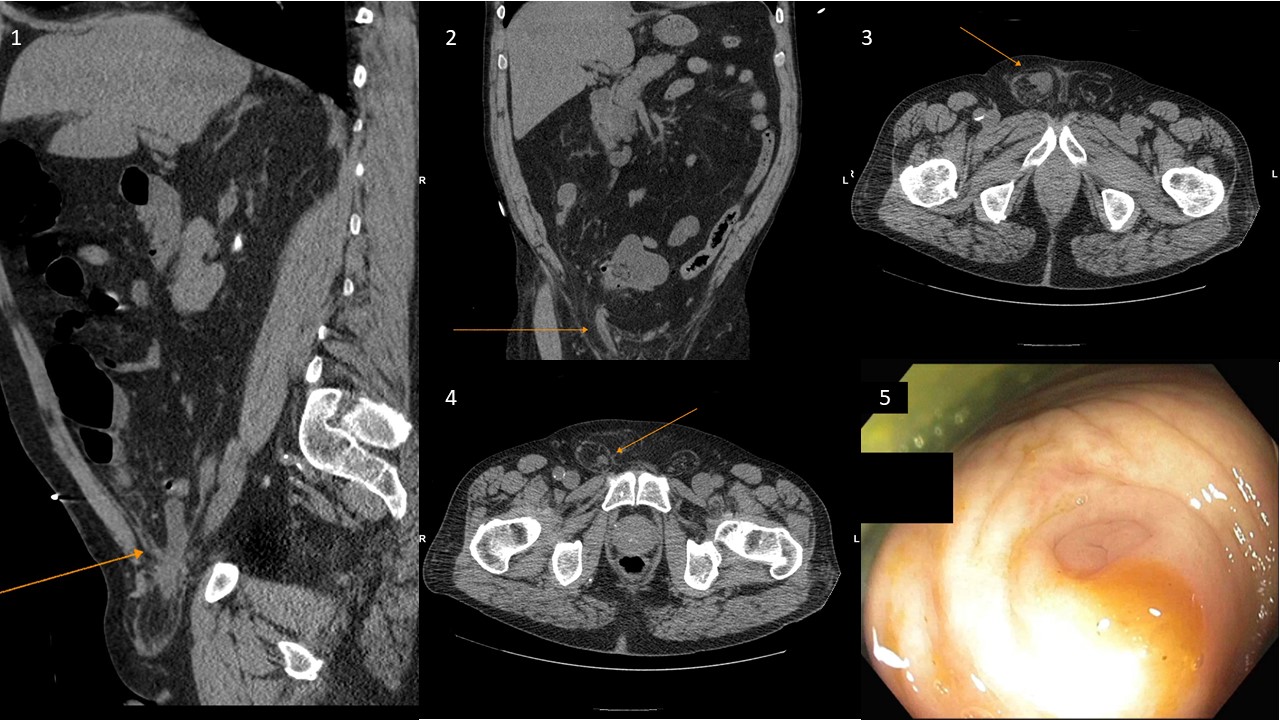