P2377 - Rectal Bleeding in a Young Adult: An Unfortunate Case of Anorectal Melanoma 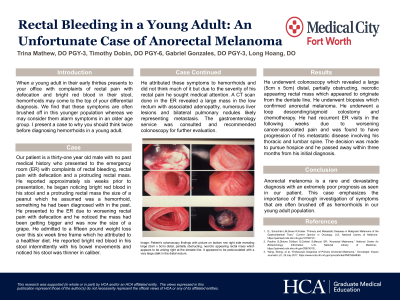 Introduction: When a young adult in their early thirties presents to your office with complaints of rectal pain with defecation and bright red blood in their stool, hemorrhoids may come to the top of your differential diagnosis. We find that these symptoms are often brushed off in this younger population whereas we may consider them alarm symptoms in an older age group. I present a case to why you should think twice before diagnosing hemorrhoids in a young adult.

Case Description/Methods: Our patient is a thirty-one year old male with no past medical history who presented to the emergency room (ER) with complaints of rectal bleeding, rectal pain with defecation and a protruding rectal mass. He reported approximately six weeks prior to presentation, he began noticing bright red blood in his stool and a protruding rectal mass the size of a peanut which he assumed was a hemorrhoid, something he had been diagnosed with in the past. He presented to the ER due to worsening rectal pain with defecation and he noticed the mass had been getting bigger and was now the size of a grape. He admitted to a fifteen pound weight loss over this six week time frame which he attributed to a healthier diet. He reported bright red blood in his stool intermittently with his bowel movements and noticed his stool was thinner in caliber. He attributed these symptoms to hemorrhoids and did not think much of it but due to the severity of his rectal pain he sought medical attention. A CT scan done in the ER revealed a large mass in the low rectum with associated adenopathy, numerous liver lesions and bilateral pulmonary nodules likely representing metastasis. He underwent colonoscopy which revealed a large (5cm x 5cm) distal, partially obstructing, necrotic appearing rectal mass which appeared to originate from the dentate line. He underwent biopsies which confirmed anorectal melanoma. He underwent a loop descending/sigmoid colostomy and chemotherapy. He had recurrent ER visits in the following weeks due to worsening cancer-associated pain and found to have progression of his metastatic disease which involved his thoracic and lumbar spine. The decision was made to pursue hospice and he passed away within three months from his initial diagnosis.

Discussion: Anorectal melanoma is a rare and devastating diagnosis with an extremely poor prognosis as seen in our patient. This case emphasizes the importance of thorough investigation of symptoms that are often brushed off as hemorrhoids in our young adult population. 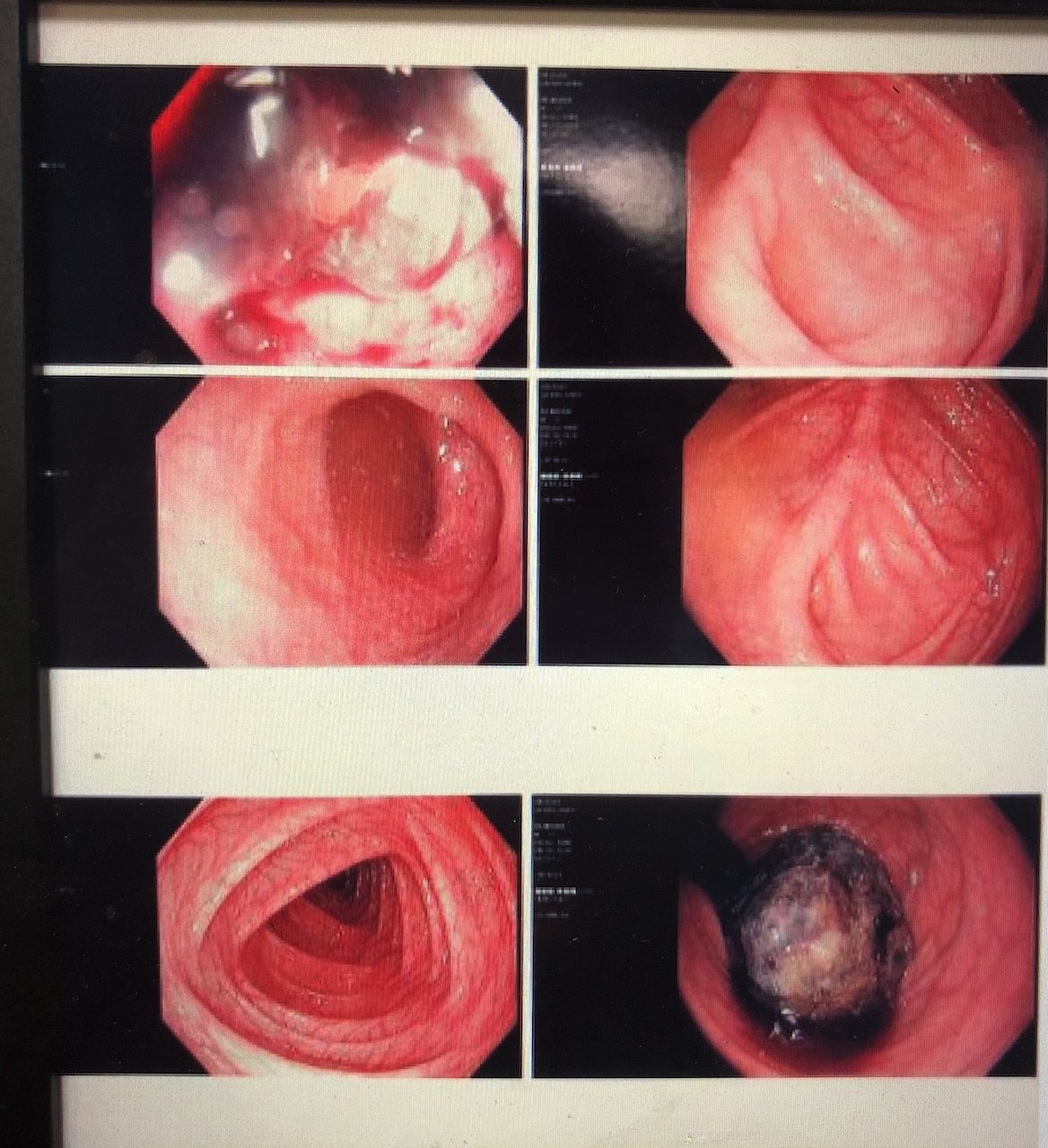 Figure: Patient's colonoscopy findings with picture on bottom row right side revealing large (5cm x 5cm) distal, partially obstructing, necrotic appearing rectal mass which appears to be arising right at the dentate line. It appeared to be pedunculated with a very large stalk in the distal rectum.