P2384 - Quantitative Analysis of the Tug Sign in Adults: An Endoscopic Finding of Eosinophilic Esophagitis 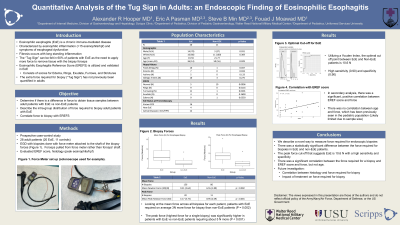 Introduction: Eosinophilic esophagitis (EoE) is a significant cause of dysphagia and food impactions. The clinical symptoms of EoE are likely secondary to tissue remodeling and fibrosis. Endoscopists have long appreciated a firmness of the esophageal mucosa when obtaining EoE biopsies, referred to as the “tug” or “pull” sign. Quantitative measurements have recently been recorded in pediatric patients but not in the adult population. We seek to measure the quantifiable difference in force required to obtain esophageal biopsies in adult patients with and without EoE.

Methods: Patients undergoing esophagogastroduodenoscopy (EGD) for a history of or suspected EoE were enrolled. During endoscopy, a screw compressor clamp was attached at the most distal positioning marker of a 2.8 mm radial jaw forceps (Boston Scientific). The clamp provided a stable position to attach a Newton force gauge (Nidec-Shimpo FG-3006). Maximum forces required to obtain up to 8 esophageal biopsies from the proximal half and distal half of the esophagus were measured, from which mean force and peak force per patient were calculated. Total eosinophil counts per high power field (eos/hpf) and Eosinophilic Esophagitis Endoscopic Reference Score (EREFS) were obtained.

Discussion: We showed that obtaining biopsies from adult EoE patients requires significantly more force compared to non-EoE controls, confirming the previously noted “tug” or “pull” sign. Measuring a peak force appears to be both sensitive and specific for the identification of EoE. The association between the peak force and EREFS suggests a potential correlation with fibrosis. Ultimately, the measurement of tensile force could serve as an additional tool in the diagnosis, prognosis and management of EoE.