P2400 - Impact of a DNA Methylation-based Assay on Gastroenterologists’ Recommendations for Ablation and Surveillance Time for Risk-Stratified BE Patients: A Randomized Clinical Utility Study 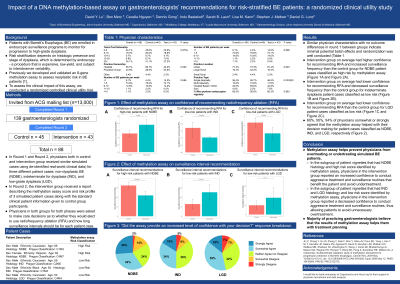 Introduction: Patients diagnosed with Barrett’s esophagus (BE) are typically enrolled in endoscopic surveillance programs to detect progression to high-grade dysplasia (HGD). Currently, stratifying risk depends on the histologic presence and stage of dysplasia, which poses several drawbacks, including high inter-observer variability. In this important context, an 8-gene methylation assay was developed and validated at Johns Hopkins University to assess future neoplasia risk in BE patients. To assess the impact of this assay, a randomized controlled clinical utility trial was conducted.

Methods: American College of Gastroenterology member physicians were randomly invited for a two-phase virtual study. Consenting physicians were randomized into one of two arms: a control group, and an intervention group. All physicians received similar simulated cases (using de-identified real-world clinical data) for three different patient cases (one with non-dysplastic BE, one with indeterminate for Dysplasia, and one with low-grade dysplasia). For each case, providers were asked to make care decisions as to whether they would elect to use radiofrequency ablation (RFA) and how long surveillance intervals should be. During Phase 2 the intervention group received a report describing the assay score and risk profile of 3 simulated patient cases along with the standard clinical patient information given to control group participants. Providers once again made treatment and surveillance decisions.


Results: Of the 147 consented gastroenterologists who initially enrolled, 82 completed both phases of the study (55% completion). Both groups made very similar surveillance and ablation decisions during Phase 1. However, during Phase 2, significant differences were observed. 64% of physicians in the intervention group recommended ablation when the assay identified a patient as high-risk for disease progression, compared with the control group (39% recommended ablation). For patients identified as low risk of progression by the assay, the average surveillance interval prescribed was 13 months longer in the interventional group compared to the control group.

Discussion: Our results suggest that a clinically validated BE risk-stratification assay may be useful in guiding clinical decisions that benefit the patient.