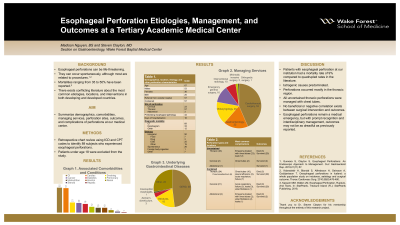 Introduction: Esophageal perforation is a rare clinical entity with an incidence of 3 per 1,000,000 annually that is associated with bleak outcomes.1 While perforations can occur spontaneously, most are iatrogenic and related to procedures.2 The literature has reported death rates as high as 36% to 50%.3 The aim of this study was to evaluate demographics and treatment modalities at a tertiary medical center.

Methods: This was a retrospective chart review in the setting of a tertiary academic medical center. ICD and CPT codes were used to extract 311 documented cases of esophageal perforation at our institution. Charts were reviewed to further identify 89 subjects who experienced esophageal perforation. Patient information was de-identified. A separate Excel document was used to record data for study numbers 1 through 89.

Results: Patients diagnosed with esophageal perforation averaged 67 years and affected more males than females. Most perforations were contained and referred from outside hospitals. Thoracic perforations predominated followed by cervical and abdominal. On average, patients remained in the hospital for 16 days. Iatrogenic causes were identified in 60% of cases [Table 1]. The most common underlying diseases were GI, cardiac, and cancer [Chart 1]. Half of the patients received surgical intervention to repair the esophagus. Most patients were managed by a multidisciplinary team. We observed a death rate of 9%. The most common complication was empyema managed with chest tubes.

Discussion: Our institution reports an esophageal perforation death rate of 9% compared to quadrupled rates in the literature. Approximately 1% of perforations directly led to death with thoracic perforations being most common. About half of the thoracic perforations were complicated by empyema and managed with chest tubes. Patients who died had either cervical or abdominal perforations. We observed significantly more contained versus uncontained perforations, which may have contributed to higher survival rate. In addition, our institution’s multidisciplinary approach to managing perforations could have contributed to better outcomes and increased survival. Esophageal perforation remains a medical emergency, but perhaps with prompt recognition and interdisciplinary management, outcomes may not be as dreadful as previously reported. 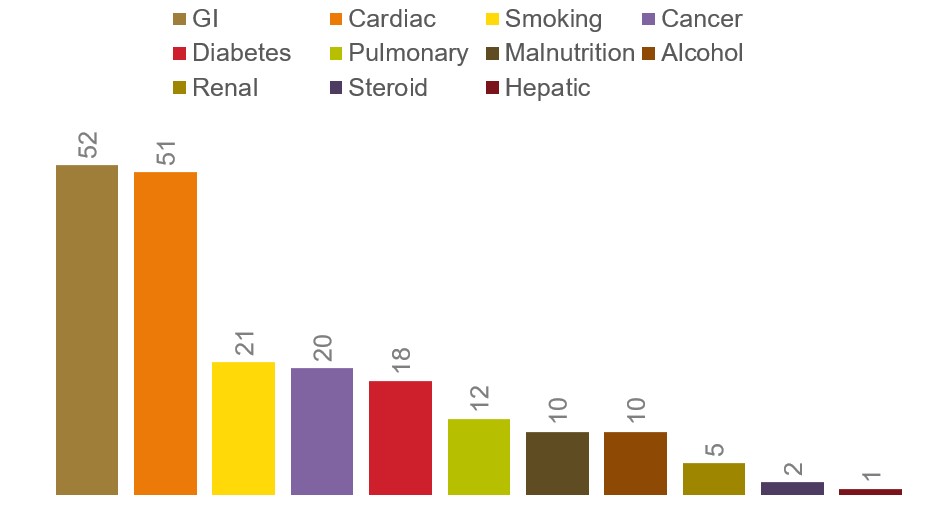