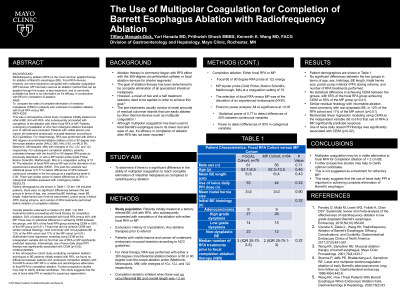 Introduction: Radiofrequency ablation is the standard treatment for Barrett’s esophagus (BE). MP can be applied through the scope, is less expensive, and is commonly available. We compared rates of complete elimination of intestinal metaplasia (CEIM) in patients with completion ablation with focal RFA (FOCAL) versus MP.

Methods: This was a retrospective cohort study of patients initially treated at a referral BE Unit with RFA, who proceeded with completion ablation with FOCAL or MP. Visible lesions underwent mucosal resection according to guidelines. Initially, RFA was performed with a 360 degree balloon (HALO 360); or 60 and 90 degree probes (HALO 60, or HALO 90) with energies of 10J, 12J, and 12J. For completion ablation, the FOCAL were used or a MP bipolar probe (Gold Probe; Boston Scientific, Marlborough, MA) at a coagulation setting of 15 W at the discretion of an experienced endoscopist (KKW). This post-hoc analysis had power of 0.77 to detect differences of 45% between continuous variables with a= 0.05. Power to detect differences of 30% in categorical variables was similar.

Results: Patient demographics are shown in Table 1. Of the 139 included patients, there were no significant differences between the two groups in terms of age, sex, presenting BE histology, mean BE length, hiatal hernia size, proton pump inhibitor (PPI) dosing scheme, and number of RFA treatments before completion ablation.

Patients had a median of 2 (IQR: 1-3) RFA treatments before proceeding with FOCAL or MP. 54% of patients proceeded with FOCAL versus 46% with MP. There was no difference in achieving CEIM between the groups, with 65% of the FOCAL group achieving CEIM vs 55% of the MP group (p< 0.21). Those that did not achieve CEIM had similar residual histology, most commonly with non-dysplastic BE, in 12% of the RFA cohort and 17% of the MP cohort (p< 0.51). Multivariate linear regression modeling using CEIM as the independent variable did not find that use of RFA or MP predicted response. Twice daily dosed PPI therapy was associated with CEIM (p< 0.02).

Discussion: In this retrospective cohort study of completion ablation techniques after RFA, we found no difference between patients who underwent FOCAL versus MP. MP is a viable and advantageous alternative to focal RFA for completion ablation. Further prospective studies may help to clarify optimal candidates.