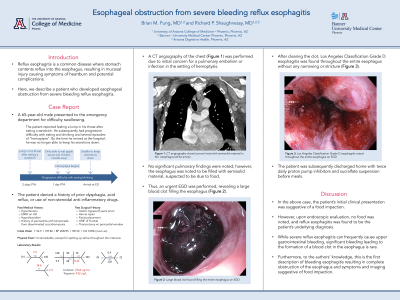 Introduction: Reflux esophagitis is a common disease where stomach contents reflux into the esophagus, resulting in symptoms of heartburn and potential complications. In the following case report, we describe a patient who developed esophageal obstruction from severe bleeding reflux esophagitis.

Case Description/Methods: A 65-year-old male with a past medical history significant for hypertension, end-stage renal disease on hemodialysis, hypothyroidism, and history of gastric bypass eight years prior presented to the emergency department for difficulty swallowing. The patient reported feeling a lump in his throat after eating a sandwich two days prior to presentation. He subsequently had progressive difficulty with eating and drinking and several episodes of “hemoptysis”. By the time he arrived at the hospital, he was no longer able to keep his secretions down. The patient denied a history of prior dysphagia, acid reflux, or use of non-steroidal anti-inflammatory drugs. On examination, the patient was spitting up saliva, but was otherwise unremarkable. Laboratory results revealed a hemoglobin level of 7.4 g/dL and INR 1.3. Computed tomography angiography of the chest was performed due to initial concern for a pulmonary embolism or infection in the setting of hemoptysis. No significant pulmonary findings were noted; however, the esophagus was noted to be filled with semisolid material, suspected to be due to food. Thus, an urgent esophagogastroduodenoscopy was performed, revealing a large blood clot filling the esophagus. After clearing the clot, Los Angeles Classification Grade D esophagitis was found throughout the entire esophagus without any narrowing or stricture. The patient was subsequently discharged home with twice daily proton pump inhibitors and sucralfate suspension before meals.

Discussion: In the above case, the patient’s initial clinical presentation was suggestive of a food impaction. However, upon endoscopic evaluation, no food was noted, and reflux esophagitis was found to be the patient’s underlying diagnosis. While severe reflux esophagitis can frequently cause upper gastrointestinal bleeding, significant bleeding leading to the formation of a blood clot in the esophagus is rare. Furthermore, to the authors’ knowledge, this is the first description of bleeding esophagitis resulting in complete obstruction of the esophagus and symptoms and imaging suggestive of food impaction.