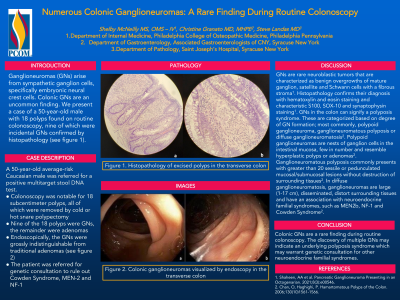 Introduction: Ganglioneuromas (GNs) arise from sympathetic ganglion cells, specifically embryonic neural crest cells. They are typically asymptomatic, occur at any anatomic location, however, most GNs are found in the head, neck and/or adrenal glands1. We present a case of a 50-year-old male with 18 polyps found on routine colonoscopy, nine of which were incidental GNs confirmed by histopathology.

Case Description/Methods: A 50-year-old average-risk Caucasian male was referred for a positive multitarget stool DNA test. Colonoscopy was notable for 18 subcentimeter polyps, all of which were removed by cold or hot snare polypectomy. Nine of the 18 polyps were GNs, the remainder were adenomas. Endoscopically, the GNs were grossly indistinguishable from traditional adenomas (see images a and b). The patient was referred for genetic consultation to rule out Cowden Syndrome, MEN-2 and NF-1.

Discussion: GNs are rare neuroblastic tumors that are characterized as benign overgrowths of mature ganglion, satellite and Schwann cells with a fibrous stroma1. They are classically found in the posterior mediastinum (41.5%), retroperitoneum (37.5%), adrenal glands (21%) and neck (8%)1. Histopathology confirms their diagnosis with hematoxylin and eosin staining and characteristic S100, SOX-10 and synaptophysin staining1.

Colonic GNs are a rare finding during routine colonoscopy. The discovery of multiple GNs may indicate an underlying polyposis syndrome which may warrant genetic consultation for other neuroendocrine familial syndromes.

Figure: Endoscopically, the GNs were grossly indistinguishable from traditional adenomas (see images a and b).