P2324 - A Rare Case of Cecal Volvulus: A Diagnostic and Therapeutic Dilemma in an Elderly With Acute Myocardial Infarction 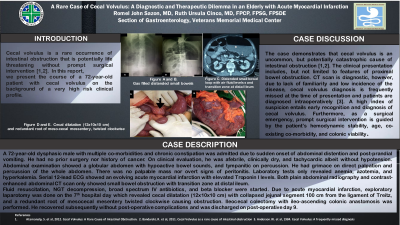 Introduction: Cecal volvulus is a rare occurrence of intestinal obstruction that is potentially life threatening without prompt surgical intervention. In this report, we present the course of a 72-year-old patient with cecal volvulus on the background of a very high risk clinical profile.

Case Description/Methods: A 72-year-old dysphasic male with multiple co-morbidities and chronic constipation was admitted due to sudden onset of abdominal distention and post-prandial vomiting. He had no prior surgery nor history of cancer. On clinical evaluation, he was afebrile, clinically dry, and tachycardic albeit without hypotension. Abdominal examination showed a globular abdomen with hypoactive bowel sounds, and tympanitic on percussion. He had grimace on direct palpation and percussion of the whole abdomen. There was no palpable mass nor overt signs of peritonitis. Laboratory tests only revealed anemia, azotemia, and hyperkalemia. Serial 12-lead ECG showed an evolving acute myocardial infarction with elevated Troponin I levels. Both plain abdominal radiography and contrast-enhanced abdominal CT scan only showed small bowel obstruction with transition zone at distal ileum.
Fluid resuscitation, NGT decompression, broad spectrum IV antibiotics, and beta blocker were started. Due to acute myocardial infarction, exploratory laparotomy was done on the 7th hospital day which revealed cecal dilatation (12x10x10cm) with collapsed jejunal segment 100 cm from the ligament of Treitz, and a redundant root of mesocecal mesentery twisted clockwise causing obstruction. Ileocecal colectomy with ileo-ascending colonic anastomosis was performed.
He recovered subsequently without post-operative complications and was discharged on post-operative day 9.

Discussion: The case demonstrates that cecal volvulus is an uncommon, but potentially catastrophic cause of intestinal obstruction. The clinical presentation includes, but not limited to features of proximal bowel obstruction. CT scan is diagnostic, however, due to lack of familiarity and low incidence of the disease, cecal volvulus diagnosis is frequently missed at the time of presentation and patients are diagnosed intraoperatively. A high index of suspicion entails early recognition and diagnosis of cecal volvulus. Furthermore, as a surgical emergency, prompt surgical intervention is guided by the patient’s hemodynamic stability, age, co-existing co-morbidity, and colonic viability. 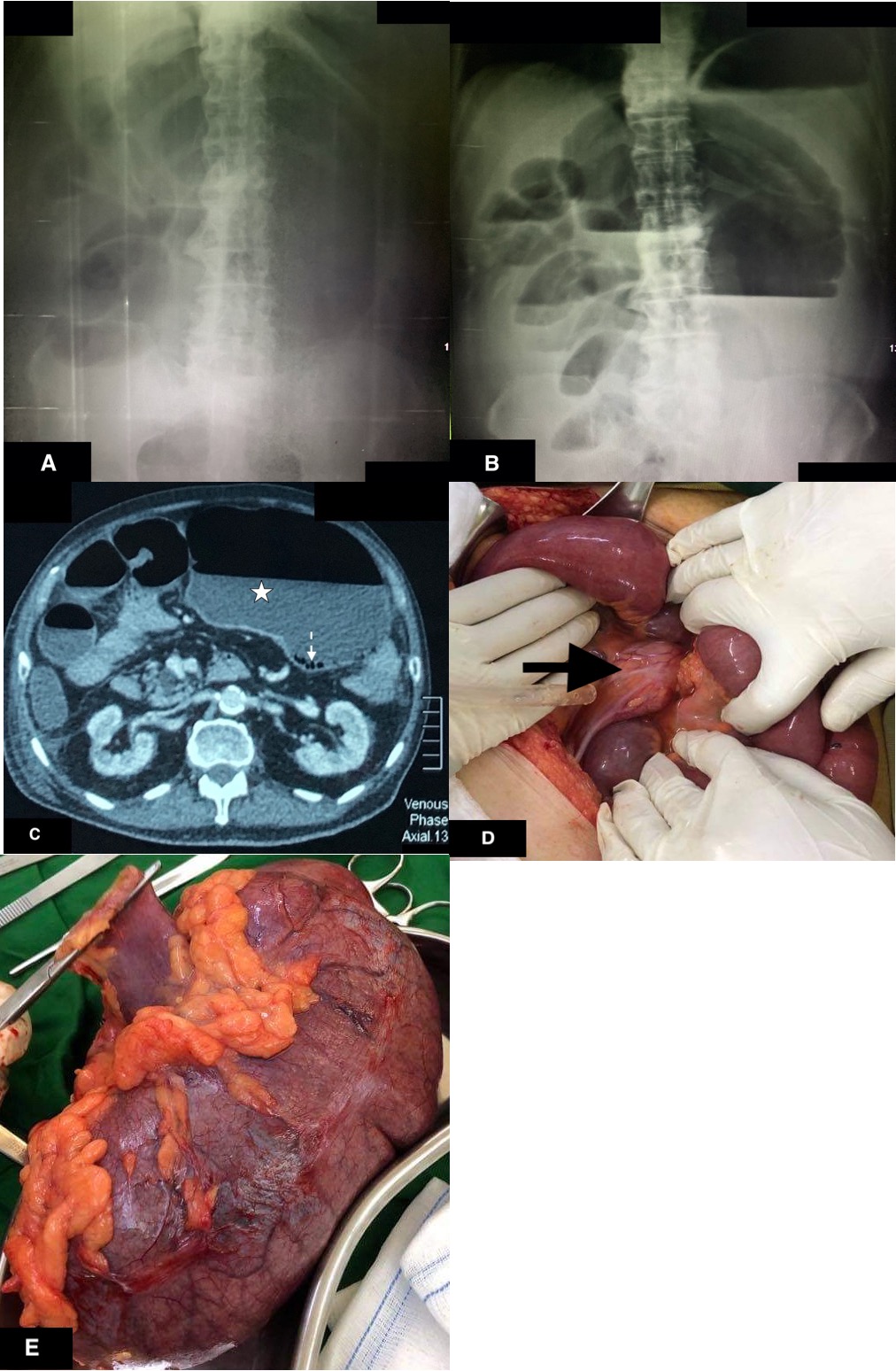