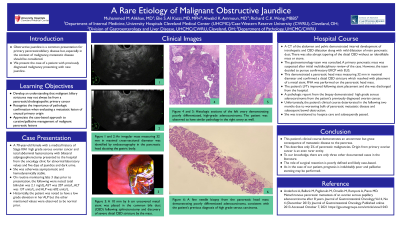 Introduction: Obstructive jaundice is a common presentation for primary pancreaticobiliary disease but, especially in the context of malignancy, metastatic disease should be considered. Here we present the case of a patient with previously diagnosed malignancy presenting with new jaundice.

Case Description/Methods: A 70-year-old female with a medical history of Stage IIIA1 high grade serous ovarian cancer and total abdominal hysterectomy with bilateral salpingoopherectomy presented to the hospital from the oncology clinic for abnormal laboratory values and five days of jaundice and dark urine. She was otherwise asymptomatic. On routine monitoring labs 3 days prior to presentation, the following were noted: total bilirubin was 2.1 mg/dL, AST was 207 units/L, ALT was 137 units/L, and ALP was 602 units/L. Historically, the patient was noted to have a low grade elevation in her ALP but the other mentioned values were observed to be normal prior. A CT of the abdomen and pelvis demonstrated interval development of intrahepatic and CBD dilatation along with mild dilatation of main pancreatic duct. There was also abrupt tapering of the distal CBD without an identifiable mass or stone. The gastroenterology team was consulted. A primary pancreatic mass was suspected after initial multidisciplinary review of the case. However, the team decided to pursue confirmatory ERCP with EUS. This demonstrated a pancreatic head mass measuring 32 mm in maximal diameter and confirmed a distal CBD stricture which resolved with placement of a metal stent. FNA was performed on the pancreatic head mass. The patient’s LFTs improved following stent placement and she was discharged from the hospital. A pathologic report from the biopsy demonstrated high grade serous adenocarcinoma from the patient’s previously diagnosed ovarian cancer. Unfortunately, the patient’s clinical course deteriorated in the following two months due to worsening bulk of pancreatic metastatic disease and subsequent bowel obstruction. She is currently receiving hospice care.

Discussion: This patient’s clinical course demonstrates an uncommon but grave consequence of metastatic disease to the pancreas, which describes only 2% of pancreatic malignancies. Origin from primary ovarian cancer is an even rarer entity. To our knowledge, there are only three other documented cases in the literature. The role of surgical resection is poorly defined and likely case-based. As in the case of our patient, prognosis is indubitably poor and palliative stenting may be performed.