P2076 - The Vanishing Mass: Giant Gastric Ulcers in the Era of PPIs 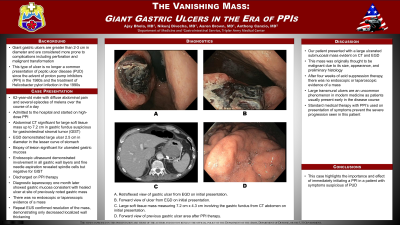 Introduction: A giant gastric ulcer is an ulcer greater than 2-3 cm in diameter that is considered to be more prone to complications including perforation and malignant transformation. This type of ulcer is no longer a common presentation of peptic ulcer disease (PUD) since the advent of proton pump inhibitors (PPI) in the 1980s and the treatment of Helicobacter pylori infection in the 1990s. This case demonstrates the modern day presentation and treatment of a giant gastric ulcer with features suggestive of malignancy on initial visual, histological, and radiological inspection.

Case Description/Methods: A 62-year-old male presented to the emergency department with diffuse abdominal pain and several episodes of melena. The patient was admitted and immediately started on high-dose PPI after being adequately resuscitated. An abdominal CT was significant for a large soft tissue mass up to 7.2 cm involving the gastric fundus, which was suspicious for a gastrointestinal stromal tumor (GIST).

An esophagogastroduodenoscopy (EGD) was performed, which demonstrated a large ulcer measuring 2.5 cm in diameter in the lesser curve of the stomach. A biopsy of the lesion was significant for ulcerated gastric mucosa with chronic active gastritis and negative for Helicobacter pylori. The patient was referred for an endoscopic ultrasound (EUS) during which the lesion appeared to involve all of the gastric wall layers. Fine needle aspiration revealed the presence of spindle cells but markers for GIST were negative. PPI therapy was continued following discharge.

A month after the initial presentation, general surgery performed a diagnostic laparoscopy where they only visualized gastric mucosa consistent with a healed ulcer at the site of the previously noted gastric mass. There was no evidence of a mass endoscopically or laparoscopically. A repeat EUS confirmed the resolution of the mass, demonstrating only decreased localized wall thickening.

Discussion: Our patient presented with a large ulcerated submucosal mass evident on CT and EGD. This mass, originally thought to be malignant due to its size, appearance, and preliminary histology was resolved after four weeks of acid suppression therapy. Large transmural ulcers are an uncommon phenomenon in modern medicine as patients present early in disease course and standard medical therapy with PPI’s prevent the severe progression seen in this patient. This case highlights the importance and effect of immediately initiating a PPI in a patient with symptoms suspicious of PUD. 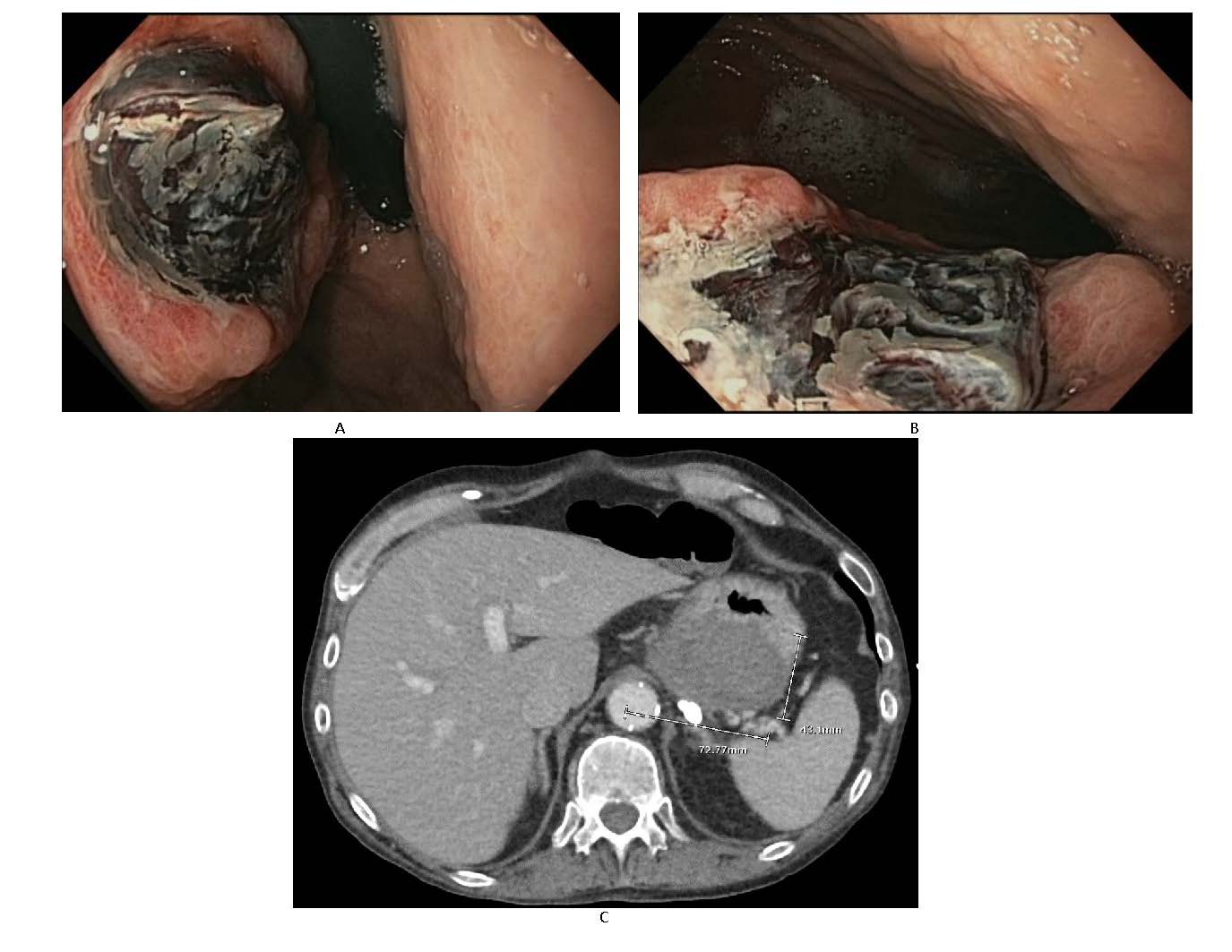