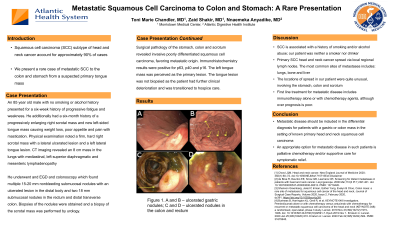 Introduction: Head and neck squamous cell carcinomas (SCCs) commonly metastasize to the lung, bones and occasionally the liver. We present a rare case of metastatic SCC to the colon and stomach from a suspected primary tongue mass.

Case Description/Methods: An 85 year old male with no smoking or alcohol history presented for six weeks of progressive fatigue and weakness. He also had a six month history of a progressive enlarging right scrotal mass and new left tongue mass causing weight loss, poor appetite and pain with mastication for which he was being evaluated as an outpatient. Physical exam noted a firm, hard right scrotal mass with a lateral ulcerated lesion and left lateral tongue lesion. Lab work noted macrocytic anemia of 6.1 g/dl from 10.7 g/dl two months prior and positive stool guaiac. He received two units of packed red blood cells and was admitted for further workup.

CT imaging revealed an 8 cm mass in the lungs with mediastinal, left superior diaphragmatic and mesenteric lymphadenopathy. He underwent an EGD and colonoscopy which found multiple 15-20 mm nonbleeding submucosal nodules with an ulcerated lesion in the distal body and two 18 mm submucosal nodules in the rectum and distal transverse colon (Figure 1). Biopsies of the nodules were obtained. Biopsy of the scrotal mass was performed by urology. Surgical pathology revealed invasive poorly differentiated squamous cell carcinoma, favoring metastatic origin. Immunohistochemistry results were positive for p63, p40 and p16 and the left tongue mass was perceived as the primary lesion. It was not biopsied as the patient had further clinical deterioration and was transitioned to hospice.

Discussion: SCC is typically diagnosed in older men with a significant history of smoking and/or alcohol use. Our patient was neither a smoker nor drinker. Distant metastasis outside of the lungs, liver and bone for a primary SCC head and neck cancer is rare as it typically spreads via local regional lymph nodes. The locations of spread in our patient were quite unusual, involving the stomach, colon and scrotum. First line treatment for metastatic disease includes immunotherapy alone or with chemotherapy agents. In our patient, his rapid clinical deterioration disqualified him from such therapy.

This case highlights a rare presentation of head and neck SCC with an unexpected site of metastasis. Patients who present with gastric or colon mass in the setting of a known primary head and neck SCC, metastatic disease should be included in the differential diagnosis. 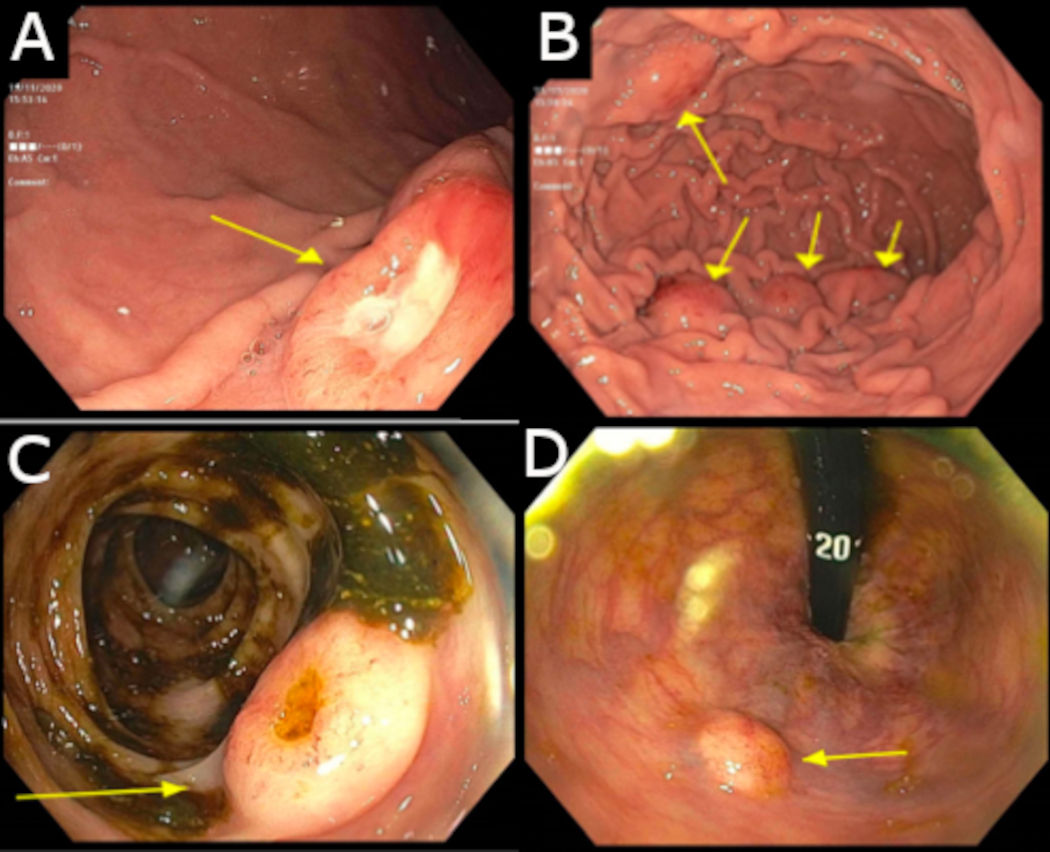 Figure: Figure 1. A and B-ulcerated gastric nodules; C and D-ulcerated nodules in the colon and rectum.