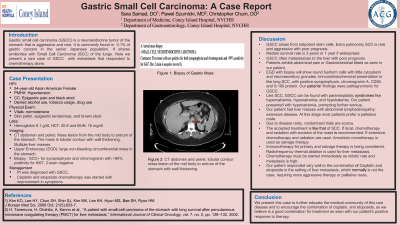 Introduction: Gastric small cell carcinoma (GSCC) is a neuroendocrine tumor of the stomach that is aggressive and rare. It is commonly found in the 0.1% of gastric cancers in the senior Japanese population. It shares similarities with Small Cell Carcinoma (SCC) of the lungs.

Case Description/Methods: A 54-year-old female with PMHx of HTN had epigastric pain and melena.

Biopsy – SCC+ for synaptophysin and chromogranin with >90% positivity for Ki67

CT abdomen and pelvis: intra-abdominal lymphadenopathy and hepatic lesions. Pt was diagnosed with GSCC and Cisplatin and etoposide chemotherapy was started with improvement.

Discussion: GSCC arises from totipotent stem cells. Extra pulmonary SCC is rare and aggressive with poor prognosis. Median survival is 3 years or 1 year if widespread. It often metastasizes to the liver with poor prognosis. PTs exhibit abdominal pain or GI bleed. The EGD with biopsy revealed round fusiform cells with little cytoplasm and neurosecretory granules. Immunohistochemical presentation is like lung SCC, with positive synaptophysin, chromogranin A, CD56, and S-100 protein. Our PT’s findings were pathognomonic for GSCC.

Like SCC, GSCC can be found with paraneoplastic diseases like hypercalcemia, hyponatremia, and hypokalemia. Our patient presented with hyponatremia, prompting further workup.

There is no official staging system. If there is generalized lymphadenopathy or metastasis, the disease is extensive. PT had liver masses with abdominal lymphadenopathy: extensive disease. At that stage, PT’s prefer a palliative route. Due to disease rarity, randomized trials are scarce. The accepted treatment is like that of SCC. If local, chemotherapy, platinum-based regimen etoposide, and radiation with excision of the mass therapy is recommended. If extensive, chemotherapy and radiation are used. Amrubicin monotherapy is used as salvage therapy. Immunotherapy for primary and salvage therapy is being considered. Radiofrequency thermal ablation is used for liver metastasis. Chemotherapy must be started immediately as mitotic rate and metastasis is high. We present this case to further educate the medical community of this rare disease and combination of cisplatin, and etoposide, as we believe is a good combination for treatment. 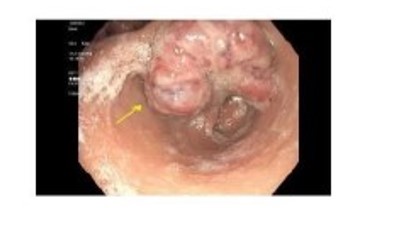