P2088 - Spleen in the Stomach, Is It Possible? Importance of Differentiating Benign From Malignant Submucosal Nodules of the Stomach: A Rare Presentation of the Splenosis 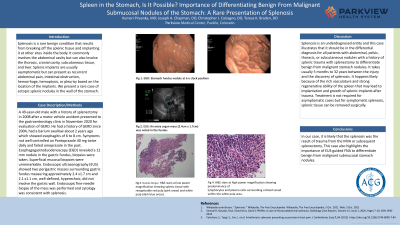 Introduction: Splenosis is a rare benign condition that results from breaking off the splenic tissue and implanting it at other sites inside the body. It commonly involves the abdominal cavity but can also involve the thoracic, cranial cavity, subcutaneous tissue, and liver. Splenic implants are usually asymptomatic but can present as recurrent abdominal pain, intestinal obstruction, hemorrhage, hemoptysis, or pleurisy based on the location of the implants. We present a rare case of ectopic splenic nodules in the wall of the stomach.

Case Description/Methods: A 49-year-old male with a history of splenectomy in 2004 after a motor vehicle accident presented to the gastroenterology clinic in November 2020 for evaluation of GERD. He had a history of GERD since 2004, had a barium swallow about 2 years ago which showed esophagitis of 6 to 8 inches. Symptoms not well controlled on Protonix 40 mg twice daily and failed omeprazole in the past. Esophagogastroduodenoscopy (EGD) revealed a 12 mm nodule in the gastric fundus, the biopsy was taken. Superficial mucosal biopsy was unremarkable. Endoscopic ultrasonography (EUS) showed two perigastric masses surrounding gastric fundus measuring approximately 2.4 x1.7 cm and 2.1 x1.1 cm, well-defined, hyperechoic, does not involve gastric wall. Endoscopic fine-needle biopsy of the mass was performed and cytology was consistent with splenosis.

Discussion: Splenosis is an underdiagnosed entity and this case illustrates that it should be in the differential diagnosis for all patients with abdominal, pelvic, thoracic, or subcutaneous nodules with a history of splenic trauma with splenectomy to differentiate benign from malignant stomach nodules. It takes usually 5 months to 32 years between the injury and the discovery of a splenosis. It happens likely because of the rich vasculature and strong regenerative ability of the spleen that may lead to implantation and growth of splenic implants after trauma. Treatment is not required for asymptomatic cases but for symptomatic splenosis, splenic tissue can be removed surgically.

In our case, it is likely that the splenosis was the result of splenectomy after MVA. This case also highlights the importance of EUS guided FNA to differentiate benign from malignant submucosal stomach nodules.