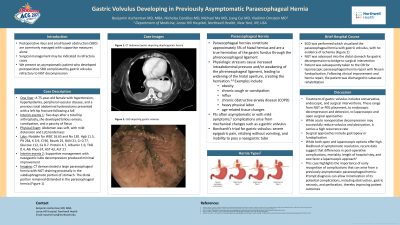 Case Description/Methods: A 75-year-old female with hypertension, hyperlipidemia, peripheral vascular disease, and a previous total abdominal hysterectomy presented with a left hip fracture following a fall. Two days after a total hip arthroplasty, she developed bilious emesis, constipation, and a paucity of flatus. Abdomen was soft, with mild distension and LLQ tenderness. Labs that morning had been notable for WBC 16.65 and Na 130, but were otherwise unremarkable. Supportive management with nasogastric tube decompression produced minimal improvement. CT demonstrated a large paraesophageal hernia with NGT draining proximally in the subdiaphragmatic portion of stomach. The distal portion remained distended in the paraesophageal hernia (Image 1a). An EGD was performed which visualized the paraesophageal hernia with gastric volvulus, with no evidence of ischemia (Image 1b). The NGT was advanced into the distal stomach for gastric decompression to bridge to surgical intervention. The patient was subsequently taken to the OR for laparoscopic paraesophageal hernia repair with Nissen fundoplication. Following clinical improvement and hernia repair, the patient was discharged to subacute rehabilitation.