P1976 - A Rare Cause of Abdominal Pain in an Adult: Meckel’s Diverticulitis 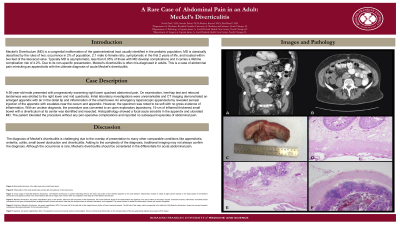 Introduction: Meckel’s Diverticulum (MD) is a congenital malformation of the gastrointestinal tract usually identified in the pediatric population. MD is classically described by the rules of two: occurrence in 2% of population, 2:1 male to female ratio, symptomatic in the first 2 years of life, and located within two feet of the ileocecal valve. Typically MD is asymptomatic, less than 0.05% of those with MD develop complications and it carries a lifetime complication risk of 4.2%. Due to its non-specific presentation, Meckel’s diverticulitis is often mis-diagnosed in adults. This is a case of abdominal pain mimicking as appendicitis with the ultimate diagnosis of acute Meckel’s diverticulitis.

Case Description/Methods: A 56-year-old-male presented with progressively worsening right lower quadrant abdominal pain. On examination, heel-tap test and rebound tenderness was elicited to the right lower and mid quadrants. Initial laboratory investigations were unremarkable and CT imaging demonstrated an enlarged appendix with air in the distal tip and inflammation of the small bowel. An emergency laparoscopic appendectomy revealed serosal injection of the appendix with exudates near the cecum and appendix. However, the specimen was noted to be soft with no gross evidence of inflammation. With an unclear diagnosis, the procedure was converted to an open exploratory laparotomy, 15-cm of inflamed thickened small bowel with a diverticulum at its center was identified and resected. Histopathology showed a focal acute serositis in the appendix and ulcerated MD. The patient tolerated the procedure without any peri-operative complications and reported no subsequent episodes of abdominal pain. 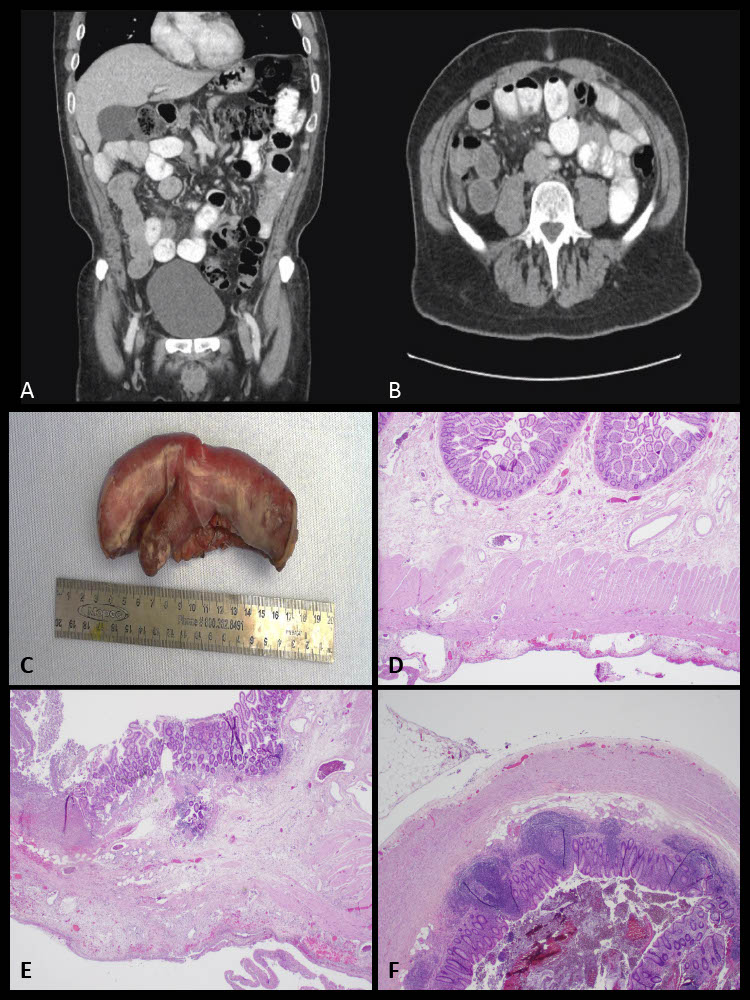