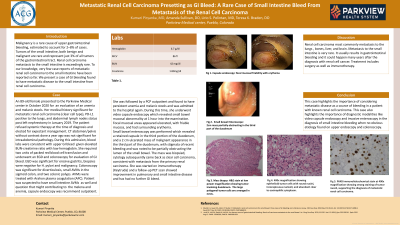 Case Description/Methods: An 89-old female presented to the Parkview Medical center in October 2020 for evaluation of anemia and melanic stools. Her medical history significant for metastatic renal cell carcinoma (clear cell type), PD-L1 positive to the lungs, and abdominal lymph nodes status post left nephrectomy in January 2019. The patient refused systemic therapy at the time of diagnosis and elected for expectant management. During this admission, she underwent an EGD and colonoscopy. EGD was significant for erosive gastritis, biopsies were negative for H. pylori and malignancy. Colonoscopy was significant for diverticulosis, small AVMs in the sigmoid colon, and two colonic polyps. AVMs were treated with Arahon plasma coagulation (APC). She was followed by a PCP and found to have persistent anemia and melanic stools and was admitted to the hospital again. During this time, she underwent video capsule enterography which revealed mucosal abnormality at 1 hour into the examination, small bowel enteroscopy was performed which revealed a retained capsule in the third portion of the duodenum, and a 2 cm ulcerated mass of malignant appearance in the third part of the duodenum, with stigmata of recent bleeding and was noted to be partially obstructing the lumen of the small bowel. The mass was biopsied, cytology subsequently came back as clear cell carcinoma, consistent with metastasis from the primary renal carcinoma. She was started on immunotherapy (Keytruda) and a follow-up PET scan showed improvement in pulmonary and small intestine disease and has had no further GI bleed.

Discussion: This case highlights the importance of considering metastatic disease as a source of bleeding in a patient with known renal cell carcinoma. This case also highlights the importance of diagnostic modalities like video capsule enterography and invasive enteroscopy in the diagnosis of small intestine bleeding when no obvious etiology found on upper endoscopy and colonoscopy.

Figure: Figure-1 A- 2cm mass in the third part of the duodenum, B- Obstructing the lumen