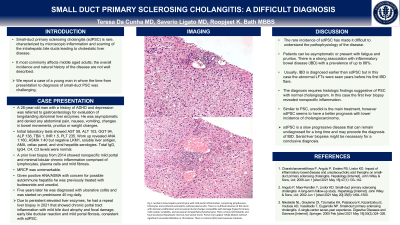 Introduction: Small-duct primary sclerosing cholangitis (sdPSC) is rare, characterized by microscopic inflammation and scarring of the intrahepatic bile ducts leading to cholestatic liver disease. It most commonly affects middle aged adults; the overall incidence and natural history of the disease are not well described. We report a case of a young man in whom the time from presentation to diagnosis of small-duct PSC was challenging.

Discussion: The rare incidence of sdPSC has made it difficult to understand the pathophysiology of the disease. Patients can be asymptomatic or present with fatigue and pruritus. There is a strong association with inflammatory bowel disease (IBD) with a prevalence of up to 88%. Usually, IBD is diagnosed earlier than sdPSC but in this case the abnormal LFTs were seen years before his first IBD flare. The diagnosis requires histologic findings suggestive of PSC with normal cholangiogram. In this case the first liver biopsy revealed nonspecific inflammation. Similar to PSC, ursodiol is the main treatment, however sdPSC seems to have a better prognosis with lower incidence of cholangiocarcinoma. sdPSC is a slow progressive disease that can remain undiagnosed for a long time and may precede the diagnosis of IBD. Serial liver biopsies might be necessary for a conclusive diagnosis.