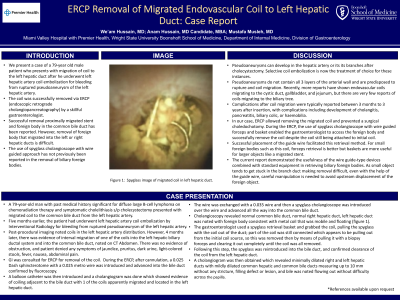 Introduction: We present a case of a 79-year old male patient who presents with migration of coil to the left hepatic duct after he underwent left hepatic artery coil embolization for bleeding from ruptured pseudoaneurysm of the left hepatic artery. The use of spyglass cholangioscope with wire guided approach has not previously been reported in the removal of biliary foreign bodies.

Case Description/Methods: A 79-year-old man with past medical history presented with migrated coil to the common bile duct from the left hepatic artery. Five months earlier, the patient had underwent left hepatic artery coil embolization by IR for bleeding from ruptured pseudoaneurysm of the left hepatic artery. Post-proceduring imging noted coils in the left hepatic artery distribution. However, 4 months later, there was evidence of interval migration of one of the coils into the left hepatic biliary ductal system and into the common bile duct, noted on CT Abdomen. GI was consulted for removal of the coil. During the ERCP, after cannulation, Dash sphincterotome with a 0.025 metro wire was introduced and advanced into the bile duct confirmed by fluoroscopy. A balloon catheter was introduced and a cholangiogram was done, showing evidence of coiling adjacent to the bile duct with 1 of the coils apparently migrated and located in the left hepatic duct. The wire was exchanged with a 0.035wire and then spyglass cholangioscope was introduced over the wire and advanced all the way into the common bile duct. Cholangioscopy revealed normal common bile duct, normal right hepatic duct, left hepatic duct was noted with foreign body consistent with metal coil that was mobile and floating. A spyglass retrieval basket was used to grab the coil, pulling the spyglass with the coil out of the duct; part of the coil was still connected which appears to be pulling out from the initial coil source, so this was removed then by means of pulling it with a biopsy forceps and clearing it out completely until the coil was removed.

Discussion: Pseudoaneurysms can develop in the hepatic artery or its its branches after cholecystectomy (1). Selective coil embolization is now the treatment of choice for these instances (1). Pseudoaneurysms do not contain all 3 layers of the arterial wall and are predisposed to rupture and coil migration. Recently, more reports have shown endovascular coils migrating to the cystic duct, gallbladder, and jejunum, but there are very few reports of coils migrating to the biliary tree (1, 2, 3). 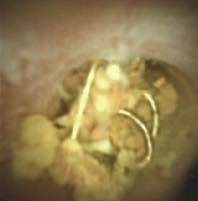