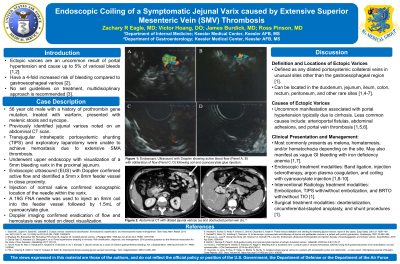 Introduction: Small bowel varices are an uncommon result of portal hypertension and cause up to 5% of variceal bleeds.1 Despite their rarity, ectopic varices have a 4-fold increased risk of bleeding compared to gastroesophageal varices.2 Guidance on how best to treat ectopic varices has not been established and a multidisciplinary approach is recommended.3 In this case, we discuss a 56 year old male with bleeding jejunal varices successfully treated with endoscopic coiling after traditional treatments had failed.

Case Description/Methods: A 56 year old male with a history of prothrombin gene mutation on warfarin presented to the emergency department with melenic stools and syncope. He had previously identified jejunal varices noted on an abdominal CT scan at an outside facility where transjugular intrahepatic portosystemic shunting (TIPS) and laparotomy assisted TIPS were unsuccessful due to extensive SMA thrombosis. Bleeding self-resolved during his previous admission and he was discharged home. He presented to our facility two months later following attempted endoscopic sclerosant injection for recurrent bleeding.

Patient underwent upper endoscopy with visualization of an ulcerated 5mm proximal jejunal varix. A linear echoendoscope was advanced to the proximal jejunum and EUS with Doppler confirmed ectopic varix with active flow. A 5mm x 8mm feeder vessel in close proximity was identified. Using a 19 G FNA needle, an 8mm coil was injected into the feeder vessel followed by injection of 1.5mL of cyanoacrylate glue. EUS confirmed eradication of flow (Figure 1). Anticoagulation was resumed after 2 days of observation.

Discussion: Jejunal varices are an uncommon manifestation associated with portal hypertension typically due to cirrhosis.4 Small bowel varices can also occur in the setting of arterioportal fistulas, abdominal adhesions, and portal vein thrombosis.4-6 Traditionally, ectopic varices have been managed via TIPS, transvenous obliteration, or exploratory laparotomy.1,2 However, reported outcomes are typically poor with up to 60% mortality and re-current bleeding in up to 40% of patients.1

Given the rarity of ectopic varices, evidence-based guidelines on their management have yet to be published. Three other case studies were identified that employed the use of endoscopic coiling in the treatment of ectopic varices in 10 patients with varying success.8-10 This case report lends a positive outcome in achieving hemostasis via endoscopic coiling with cyanoacrylate injection. 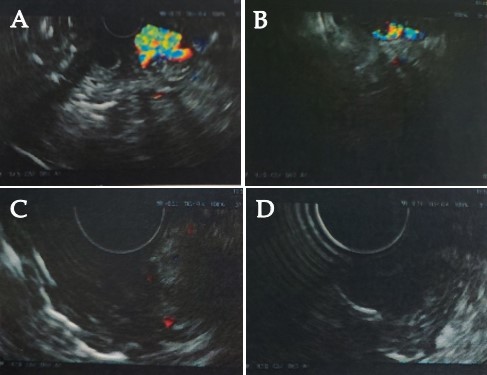