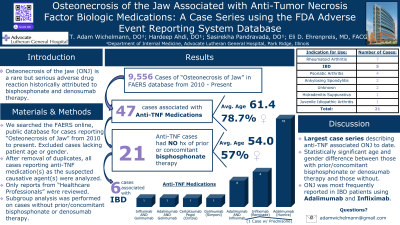 Methods: The FAERS database was searched for all reported cases of ONJ from 2010 to present. Cases lacking patient age or gender were excluded from review. Only adults (age 18 and older) and reports from Healthcare Professions were included for analysis. Duplicate cases were removed. A dataset was created for ONJ cases associated with anti-TNF medication use (see Figure 1) and demographics were summarized. Subgroup analysis was performed for subjects receiving anti-TNFs without prior or concomitant denosumab or bisphosphonate therapy.

Results: 19,670 cases of ONJ were reported to the FAERS database from 2010 to present and approximately half (9,556) contained complete patient demographic data. 47 cases (0.49%) of anti-TNF-associated ONJ were identified. 78.7% of the patients were female and average age was 61.4 years +/- 13.9 years. There were 21 cases without prior or concomitant bisphosphonate or denosumab therapy. Table 1 depicts anti-TNF medications associated with these 21 cases. Male gender was associated with 43% (9 of 21) of these cases and average age was 54.0 +/- 14.6 years. IBD was listed as the indication for use in 5 cases without denosumab/bisphosphonate therapy while rheumatoid arthritis was the most frequent indication for use (7 cases).

Discussion: Although rare, 47 cases of anti-TNF-associated ONJ have been reported to the FAERS database from 2010 to present. Of these, 44.7% did not involve medications known to cause ONJ. Interestingly, male gender was more frequently reported in cases of anti-TNF-associated ONJ without denosumab/bisphosphonate therapy in comparison to those with denosumab/bisphosphonate use. Additionally, the average age for anti-TNF associated ONJ was lower than prior identified interactions. Further understanding of the mechanisms responsible for this association is required for prediction and prevention of this ADR in the future.

Table: This table represents the distribution of anti-TNF medications associated with ONJ as reported to the FAERS database from 2010 to present along with respective indications for use and the number of individual case reports.