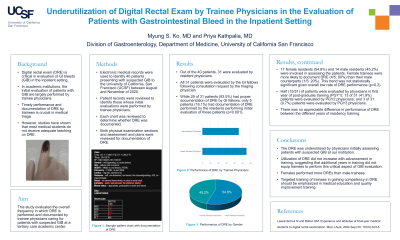 Introduction: Digital rectal exam (DRE) is critical in evaluation of GI bleeds (GIB) in the inpatient setting. In academic institutions, the initial evaluation of patients with GIB are largely performed by trainee physicians. Timely performance and documentation of DRE by trainees is crucial in medical triage. However, studies have shown that most medical students do not receive adequate teaching on DRE. This study evaluated the overall frequency in which DRE is performed and documented by trainee physicians caring for patients with suspected GIB at a tertiary care academic center.

Methods: Electronic medical records were used to identify 40 patients presenting with suspected GIB to the University of California, San Francisco (UCSF) between August and November of 2020. Patient records were reviewed to identify those whose initial evaluations were performed by trainee physicians. Each chart was reviewed to determine whether DRE was documented.

Discussion: The DRE was underutilized by physicians initially assessing patients with suspected GIB at our institution. Utilization of DRE did not increase with advancement in training, suggesting that additional years in training did not equip trainees to perform this critical aspect of GIB evaluation. Females performed more DREs than male trainees. Targeted training of trainees in gaining competency in DRE should be emphasized in medical education and quality improvement training.