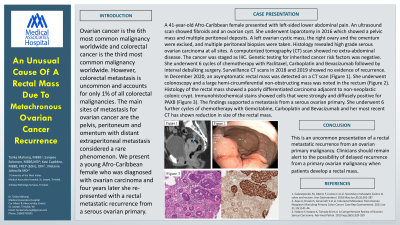 Introduction: Ovarian cancer is the 6th most common malignancy worldwide and colorectal cancer is the third most common malignancy worldwide. However, colorectal metastasis is uncommon and accounts for only 1% of all colorectal malignancies. The main sites of metastasis for ovarian cancer are the pelvis, peritoneum and omentum with distant extraperitoneal metastasis considered a rare phenomenon. We present a young Afro-Caribbean female who was diagnosed with ovarian carcinoma and four years later she represented with a rectal metastatic recurrence from a serous ovarian primary.

Case Description/Methods: A 41-year-old Afro-Caribbean female presented to her gynaecologist with left-sided lower abdominal pain. An ultrasound scan showed fibroids and an ovarian cyst. She underwent laparotomy in 2016 which showed a pelvic mass and multiple peritoneal deposits. A left ovarian cystic mass, the right ovary and the omentum were excised, and multiple peritoneal biopsies were taken. Histology was reported as high grade serous ovarian carcinoma at all sites. A computerized tomography (CT) scan showed no extra-abdominal disease. The cancer was staged as IIIC. Genetic testing for inherited cancer risk factors were negative. She underwent 6 cycles of chemotherapy with Paclitaxel, Carboplatin and Bevacizumab followed by interval debulking surgery. Surveillance CT scans in 2018 and 2019 showed no evidence of recurrence. In December 2020, an asymptomatic rectal mass was detected on a CT scan (Figure 1). She underwent colonoscopy and a large hemi-circumferential non-obstructing mass was noted in the rectum (Figure 2). Histology of the rectal mass showed a poorly differentiated carcinoma adjacent to non-neoplastic colonic crypt. Immunohistochemical stains showed that the lesional cells were strongly and diffusely positive for PAX8 (Figure 3). The findings supported a metastasis from a serous ovarian primary. She underwent 6 further cycles of chemotherapy with Gemcitabine, Carboplatin and Bevacizumab and her most recent CT has shown reduction in size of the rectal mass. 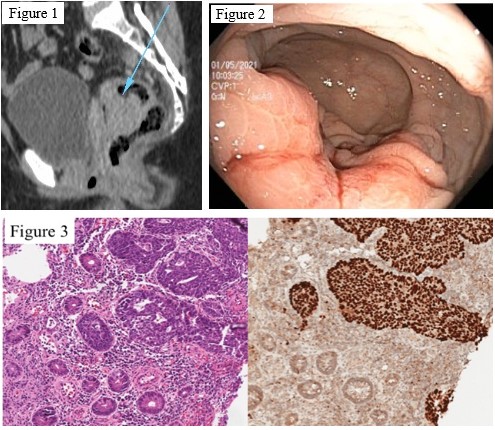