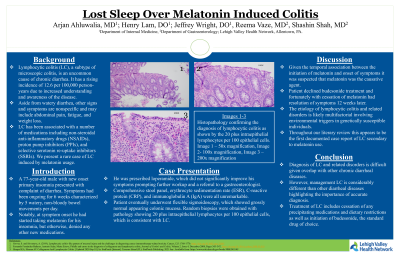 Introduction: Lymphocytic colitis (LC), a subtype of microscopic colitis, is an uncommon cause of chronic diarrhea. It has a rising incidence of 12.6 per 100,000 person-years due to increased understanding and awareness of the disease. Aside from watery diarrhea, other signs and symptoms are nonspecific and may include abdominal pain, fatigue, and weight loss. LC has been associated with a number of medications including non-steroidal anti-inflammatory drugs (NSAIDs), proton pump inhibitors (PPIs), and selective serotonin re-uptake inhibitors (SSRIs). We present a rare case of LC induced by melatonin usage.

Case Description/Methods: A 77-year-old male with new onset primary insomnia presented with complaint of diarrhea. Symptoms had been ongoing for 6 weeks characterized by 5 watery, non-bloody bowel movements per day. He denied recent dietary changes, travel history, infectious symptoms, or sick contacts. Notably, at symptom onset he had started taking melatonin for his insomnia, but otherwise, denied any other new medications. He was prescribed loperamide, which did not significantly improve his symptoms prompting further workup and a referral to a gastroenterologist. Comprehensive stool panel, erythrocyte sedimentation rate (ESR), C-reactive protein (CRP), and immunoglobulin A (IgA) were all unremarkable. Patient eventually underwent flexible sigmoidoscopy, which showed grossly normal appearing colonic mucosa. Random biopsies were obtained with pathology showing 20 plus intraepithelial lymphocytes per 100 epithelial cells, which is consistent with LC. Given the temporal association between the initiation of melatonin and onset of symptoms it was suspected that melatonin was the causative agent. Patient declined budesonide treatment and fortunately with cessation of melatonin had resolution of symptoms 12 weeks later.

Discussion: The etiology of lymphocytic colitis and related disorders is likely multifactorial involving environmental triggers in genetically susceptible individuals. Throughout our literary review this appears to be the first documented case report of LC secondary to melatonin use. Diagnosis of LC and related disorders is difficult given overlap with other chronic diarrheal diseases. However, management LC is considerably different than other diarrheal diseases highlighting the importance of accurate diagnosis. Treatment of LC includes cessation of any precipitating medications and dietary restrictions as well as initiation of budesonide, the standard drug of choice.