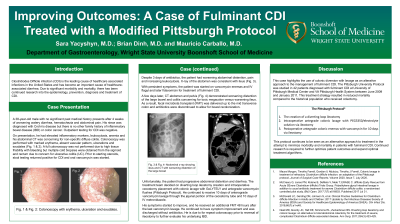 Introduction: Clostridiodes Difficile infection (CDI) is the leading cause of healthcare associated infections in the U.S. and has become an important cause of healthcare- associated diarrhea. Due to significant morbidity and mortality, there has been continued research into the prevention, diagnosis and treatment of CDI.

Case Description/Methods: A 38-year-old male presents after 4 weeks of worsening diarrhea, hematochezia and abdominal pain. His niece was diagnosed with Crohn’s disease but there is no other family history of IBD. Outpatient testing for CDI was negative.

On presentation, he had abnormal labs and CT abdomen was concerning for non-specific colitis. Colonoscopy was performed with erythema, and ulcerations. A full colonoscopy was not performed due to high tissue friability but multiple biopsies were obtained due to concern for UC. Prior to starting steroids, stool testing returned positive for CDI and oral vancomycin was started.

Despite antibiotics, the patient had worsening abdominal distention and leukocytosis. Abdominal x-ray was consistent with ileus (Fig. 1). With persistent symptoms, vancomycin enemas and IV flagyl and later fidaxomicin were started for treatment of fulminant CDI. A few days later, CT abdomen demonstrated worsening distention of the large bowel and colitis concerning for toxic megacolon vs. worsening ileus. As a result, fecal matter transplant (FMT) was delivered up to the mid transverse colon.

Unfortunately, the patient had progressive abdominal distention and diarrhea. The treatment team decided on a modified Pittsburgh Protocol (a diverting loop ileostomy creation and intraoperative cecostomy placement with colonic lavage with GoLYTELY and antegrade vancomycin flushes in addition to FMT).

His symptoms started to improve and he received an additional FMT 48 hours after the last vancomycin lavage. He experienced continuing improvement and was discharged. He is due for repeat colonoscopy prior to reversal of ileostomy to further evaluate his underlying IBD.

Discussion: This case highlights the use of colonic diversion with lavage as an alternative approach to the management of fulminant CDI. The Pittsburgh University Protocol was studied in 42 patients diagnosed with fulminant CDI at University of Pittsburgh Medical Center between 2009 and 2011. 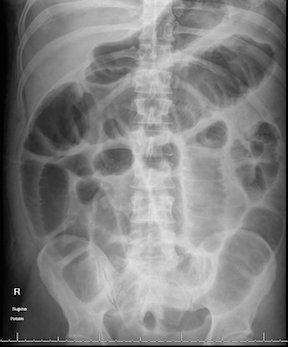 Figure: Fig. 1- The patient's abdominal X-ray with evidence of ileus.