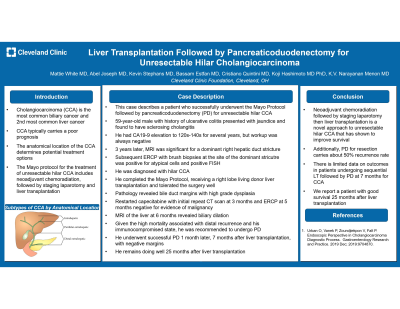 Introduction: Cholangiocarcinoma (CCA) is defined as malignancy originating from biliary epithelial cells. It is the second most common liver cancer, the most common biliary cancer, and typically carries a poor prognosis. CCA is subdivided by anatomical location (intrahepatic, hilar, and distal) to determine potential treatment options. We describe a case of a patient who successfully underwent neoadjuvant chemoradiation followed by staging laparotomy and liver transplantation (LT) for hilar CCA followed by pancreaticoduodenectomy (PD) for high grade dysplasia at the bile duct margin.

Case Description/Methods: A 59-year-old man with a history of ulcerative colitis was found to have primary sclerosing cholangitis when he presented with jaundice. For several years he had elevated CA19-9 levels but imaging and cytology was persistently negative. Three years later, he had ERCP brush biopsies positive for atypical cells and FISH positive for 9p21 locus deletion. MRI was significant for a dominant right hepatic duct stricture and he was diagnosed with hilar CCA.


He completed the Mayo Protocol, including neoadjuvant chemoradiation followed by staging laparotomy then LT. He received a right lobe living donor LT and tolerated the surgery well. However, pathology revealed positive bile duct margins with high grade dysplasia. He was restarted on capecitabine with initial repeat CT scan at three months and ERCP at five months negative for evidence of malignancy. MRI of the liver at 6 months revealed biliary dilation and given the high mortality associated with distal recurrence, he was recommended to undergo PD. He was at high risk given his immunocompromised state.

Discussion: CCA typically carries a poor prognosis. Treatment is dependent on location (intrahepatic, hilar, or distal) and ranges from resection to liver transplantation to pancreaticoduodenectomy depending on the location. Neoadjuvant chemoradiation followed by staging laparotomy then LT is a novel approach to unresectable hilar CCA that has shown to improve survival. Additionally, PD for resection carries about 50% recurrence rate. There is limited data on outcomes in patients undergoing sequential LT followed by PD at 7 months for CCA. We report a patient with good survival 25 months after liver transplantation.