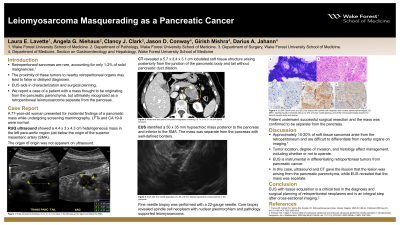 Introduction: Retroperitoneal sarcomas are a rare clinical finding, accounting for only 1-2% of solid malignancies.1 The proximity of these tumors to nearby retroperitoneal organs may lead to false or delayed diagnoses; however, endoscopic ultrasound (EUS) is a useful tool in characterization and surgical planning of these lesions. We report a case of a patient with a mass thought to be originating from the pancreatic parenchyma, but ultimately recognized as a retroperitoneal leiomyosarcoma, independent from the pancreas.

Case Description/Methods: A 77-year-old woman presented for incidental findings of a pancreatic mass while undergoing screening mammography. Subsequently, a RUQ ultrasound illustrated a heterogeneous mass just below the superior mesenteric artery (SMA), and CT demonstrated a 5.7x3.4x3.1cm lobulated mass arising posteriorly from the junction of the pancreatic body and tail, believed to be a pancreatic tumor (Fig 1A).

Patient underwent EUS which characterized a hypoechoic mass posterior to and separate from the body of the pancreas measuring 55x35mm (Fig 1B). Fine needle biopsy was performed with a 22-gauge needle.

Core biopsy revealed spindle cell neoplasm with marked nuclear pleomorphism and hyperchromasia, with < 1 mitotic figure per 10 hpf and no necrosis (Fig 1C). Cells were also positive for smooth muscle actin with focal staining for desmin (Fig 1DE). Pathology supported low grade leiomyosarcoma. Patient underwent successful surgical resection with negative margins during which the mass was confirmed to be distinct from the pancreatic parenchyma.

Discussion: Approximately 10-20% of soft tissue sarcomas arise from the retroperitoneum and are difficult to differentiate from nearby organs on imaging.1 In this case, ultrasound and CT gave the illusion that the lesion was a pancreatic cancer. However, EUS clearly revealed that the mass was separate from the pancreatic parenchyma, and this was later confirmed during successful surgical resection. EUS is a critical tool in the diagnosis and surgical planning of retroperitoneal neoplasms and is an integral step after cross-sectional imaging.2 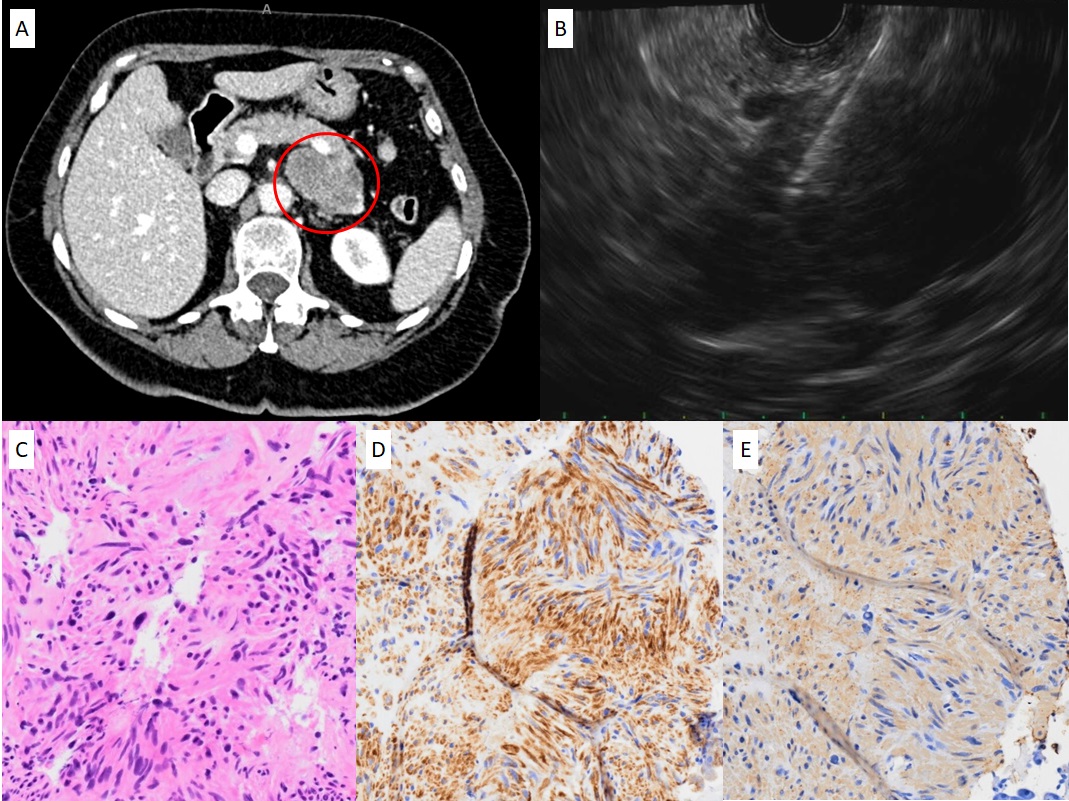