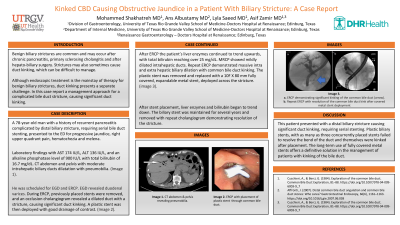 Introduction: Benign biliary strictures are common and may occur after chronic pancreatitis, primary sclerosing cholangitis and after hepato-biliary surgery. Strictures may also sometimes cause duct kinking, which can be difficult to manage. Although endoscopic treatment is the mainstay of therapy for benign biliary strictures, duct kinking presents a separate challenge. In this case report a management approach for a complicated bile duct stricture, causing significant duct kinking.

Discussion: This patient presented with a distal biliary stricture causing significant duct kinking, requiring serial stenting. Plastic biliary stents, with as many as three concurrently placed stents failed to resolve the bend of the duct and themselves were kinked after placement. The long-term use of fully covered metal stents offers a definitive solution in the management of patients with kinking of the bile duct.