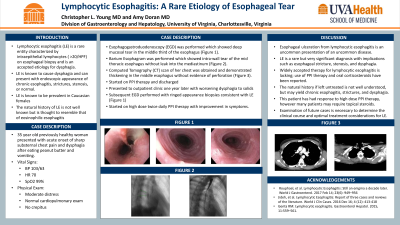 Introduction: Lymphocytic esophagitis (LE) is a rare entity characterized by intraepithelial lymphocytes ( >20/HPF) on esophageal biopsy and is an accepted etiology for dysphagia. LE is known to cause dysphagia and can present with endoscopic appearance of chronic esophagitis, stenosis, strictures, or normal. It is thought to be most prevalent in Caucasian females and the natural history is not well described. We will describe a case of esophageal tear in a patient subsequently diagnosed with lymphocytic esophagitis.

Case Description/Methods: A 35 year old previously healthy woman presented with acute onset of sharp substernal chest pain. She was in her usual state of health prior to eating peanut butter and felt sensation of food sticking in her throat. After attempting to wash down with milk, had episode of vomiting and developed sharp spasmodic chest pain. Vital signs were notable for blood pressure of 103/63 mmHg, Heart Rate of 70, oxygen saturation 99%. Physical exam notable for female patient in moderate distress, normal cardiopulmonary exam and abdominal exam with mild epigastric tenderness. Computed Tomography (CT) scan of her chest was obtained and demonstrated thickening in the middle esophagus without evidence of perforation. Esophagogastroduodenoscopy (EGD) was performed which showed deep mucosal tear in the middle third of the esophagus (Figure 1). She was started on proton pump inhibitor (PPI) therapy and discharged from the hospital.

Follow-up EGD was performed which showed healed mucosal injury. Patient was seen in outpatient one year later and complained of worsening dysphagia to solid foods. A repeat EGD was performed with normal endoscopic appearance. Esophageal biopsies demonstrated intraepithelial lymphocytes, and little intraepithelial granulocytes and were consistent with lymphocytic esophagitis. She was managed with high dose PPI therapy and her dysphagia has resolved.

Discussion: Esophageal ulceration from lymphocytic esophagitis is an uncommon presentation of an uncommon disease. LE is a rare but very significant diagnosis with implications such as esophageal stricture, stenosis, and dysphagia. Widely accepted therapy for lymphocytic esophagitis is lacking; use of PPI therapy and oral corticosteroids have been reported. The natural history if left untreated is not well understood, but may yield chronic esophagitis, strictures, and dysphagia. Examination of future cases is necessary to better determine the clinical course of LE.