P0342 - An Unusual Case of a Mediastinal Mass 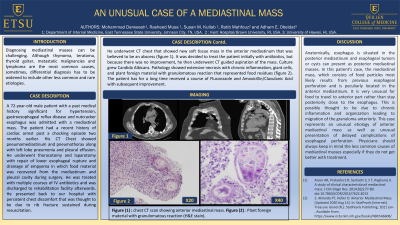 Introduction: Diagnosing mediastinal masses can be challenging. Although thymoma, teratoma, thyroid goiter and lymphoma are the most common causes, sometimes, differential diagnosis has to be widened to include other less common and rare etiologies.

Case Description/Methods: A 72-year-old male patient with a past medical history significant for hypertension, GERD and nutcracker esophagus was admitted with a mediastinal mass.

The patient had a recent history of cardiac arrest post a chocking episode two months earlier. His CT Chest showed pneumomediastinum and pneumothorax along with left lobe pneumonia and pleural effusion. He underwent thoracotomy and laparotomy with repair of lower esophageal rupture and drainage of empyema in which food material was recovered from the mediastinum and pleural cavity during surgery. He was treated with multiple courses of IV antibiotics and was discharged to rehabilitation facility afterwards. He presented back to our hospital with persistent chest discomfort that was thought to be due to rib fracture sustained during resuscitation. He underwent CT chest that showed new soft tissue mass in the anterior mediastinum that was believed to be an abscess.

It was decided to treat the patient initially with antibiotics, but because there was no improvement, he then underwent CT guided aspiration of the mass. Culture grew Candida Albicans. Pathology showed extensive necrosis with chronic inflammation, giant cells, and plant foreign material with granulomatous reaction that represented food residues. The patient has for a long time received a course of Fluconazole and Amoxicillin/Clavulanic Acid with subsequent improvement.