P0223 - Extensive Ischemic Colitis in a Patient With Rectal Adenocarcinoma 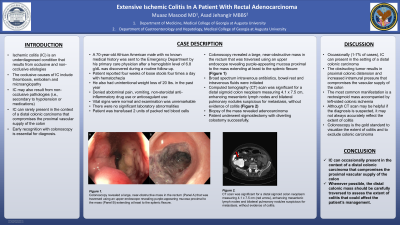 Introduction: Ischemic colitis (IC) is an underdiagnosed condition that results from occlusive (i.e. due to thrombosis, embolism, microangiopathy) and non-occlusive (i.e. secondary to hypotension or medications) etiologies. IC can rarely present in the context of a distal colonic carcinoma that compromises the proximal vascular supply of the colon. Early recognition with colonoscopy is essential for diagnosis.

Case Description/Methods: A 70-year-old African American male with no known medical history was sent to the Emergency Department by his primary care physician after a hemoglobin level of 6.8 g/dL was discovered during a routine follow-up. Patient reported four weeks of loose stools four times a day with hematochezia. He also had unintentional weight loss of 20 lbs. in the past year but denied abdominal pain, vomiting, non-steroidal anti-inflammatory drug use or anticoagulant use. Vital signs were normal and examination was unremarkable. There were no significant laboratory abnormalities. Patient was transfused 2 units of packed red blood cells. Colonoscopy revealed a large, near-obstructive mass in the rectum that was traversed using an upper endoscope revealing purple-appearing mucosa proximal to the mass extending at least to the splenic flexure (Figure 1). Broad spectrum intravenous antibiotics, bowel rest and intravenous fluids were initiated. Computed tomography (CT) scan was significant for a distal sigmoid colon neoplasm measuring 4.1 x 7.5 cm, enhancing mesenteric lymph nodes and bilateral pulmonary nodules suspicious for metastasis, without evidence of colitis. Biopsy of the mass revealed adenocarcinoma. Patient underwent sigmoidectomy with diverting colostomy successfully.

Discussion: Occasionally (1-7% of cases), IC can present in the setting of a distal colonic carcinoma. The obstructing tumor results in proximal colonic distension and increased intramural pressure that compromises the vascular supply of the colon. The most common manifestation is a rectosigmoid mass accompanied by left-sided colonic ischemia. Although CT scan may be helpful if the diagnosis is suspected, it may not always accurately reflect the extent of colitis. Colonoscopy is the gold standard to visualize the extent of colitis and to exclude colonic carcinoma. Whenever possible, the distal colonic mass should be carefully traversed to assess the extent of colitis that could affect the patient’s management.

Figure: Figure 1. Colonoscopy revealed a large, near-obstructive mass in the rectum (Panel A) that was traversed using an upper endoscope revealing purple-appearing mucosa proximal to the mass (Panel B) extending at least to the splenic flexure.