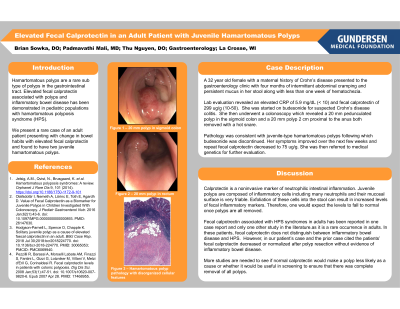 Case Description/Methods: A 32 year old female with a maternal history of Crohn’s disease presented to the gastroenterology clinic with four months of intermittent abdominal cramping and persistent mucus in her stool along with less than one week of hematochezia. Lab evaluation revealed an elevated CRP of 5.9 mg/dL (< 10) and fecal calprotectin of 299 ug/g (10-50). She was started on budesonide for suspected Crohn’s disease colitis. She then underwent a colonoscopy which revealed a 20 mm pedunculated polyp in the sigmoid colon and a 20 mm polyp 2 cm proximal to the anus both removed with a hot snare. Pathology was consistent with juvenile-type hamartomatous polyps following which budesonide was discontinued. Her symptoms improved over the next few weeks and repeat fecal calprotectin decreased to 75 ug/g. She was then referred to medical genetics for further evaluation.

Discussion: Calprotectin is a noninvasive marker of neutrophilic intestinal inflammation. Juvenile polyps are composed of inflammatory cells including many neutrophils and their mucosal surface is very friable. Exfoliation of these cells into the stool can result in increased levels of fecal inflammatory markers. Therefore, one would expect the levels to fall to normal once polyps are all removed. Fecal calpotrectin associated with HPS syndromes in adults has been reported in one case report and only one other study in the literature.as it is a rare occurrence in adults. In these patients, fecal calprotectin does not distinguish between inflammatory bowel disease and HPS. However, in our patient’s case and the prior case cited the patients’ fecal calprotectin decreased or normalized after polyp resection without evidence of inflammatory bowel disease. More studies are needed to see if normal calprotectin would make a polyp less likely as a cause or whether it would be useful in screening to ensure that there was complete removal of all polyps.