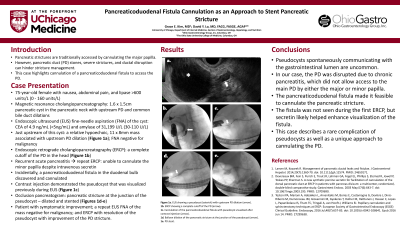 Case Description/Methods: A 75-year-old female with cholecystectomy six months ago but without any chronic tobacco or alcohol use presented with nausea and abdominal pain. Lipase was >600 units/L (0 - 160 units/L), and magnetic resonance cholangiopancreatography demonstrated a 1.6 x 1.5cm pancreatic cyst in the pancreatic neck with a complex peripancreatic necrotizing collection, upstream PD dilation up to 0.7cm, pancreatic atrophy, and dilated common bile duct up to 1cm. Endoscopic ultrasound (EUS) fine-needle aspiration (FNA) of the cyst was unrevealing with CEA of 4.9 ng/mL (< 5ng/mL) and amylase of 31,199 U/L (30-110 U/L). Just upstream of this cyst showed a relative hypoechoic, 11 x 8mm mass associated with upstream PD dilation (Figure 1a); FNA was negative for malignancy. Endoscopic retrograde cholangiopancreatography (ERCP) with biductal sphincterotomies was unrevealing for common bile duct stones, and pancreatography demonstrated a complete cutoff of the PD in the head (Figure 1b). The patient then had a recurrent acute pancreatitis for which a repeat ERCP was performed; the minor papilla was unable to be cannulated despite intravenous secretin. However, a pancreaticoduodenal fistula in the duodenal bulb was discovered and cannulated, with contrast injection demonstrating the pseudocyst that was visualized previously during EUS (Figure 1c). Occlusion pancreatogram was then performed which outlined the pancreatic stricture at the junction of the pseudocyst, which was dilated and stented (Figure 1d-e). Patient had symptomatic improvement. Repeat EUS FNA of the mass was negative for malignancy, and ERCP showed resolution of the pseudocyst and improvement of the PD stricture.

Discussion: Pseudocysts spontaneously communicating with the gastrointestinal lumen are uncommon. In our case, the PD was disrupted due to chronic pancreatitis, which did not allow access to the main PD by either the major or minor papilla. The pancreaticoduodenal fistula made it feasible to cannulate the pancreatic stricture. The fistula was not seen during the first ERCP, but secretin likely helped enhance visualization of the fistula. This case describes a rare complication of pseudocysts as well as a unique approach to cannulating the PD. 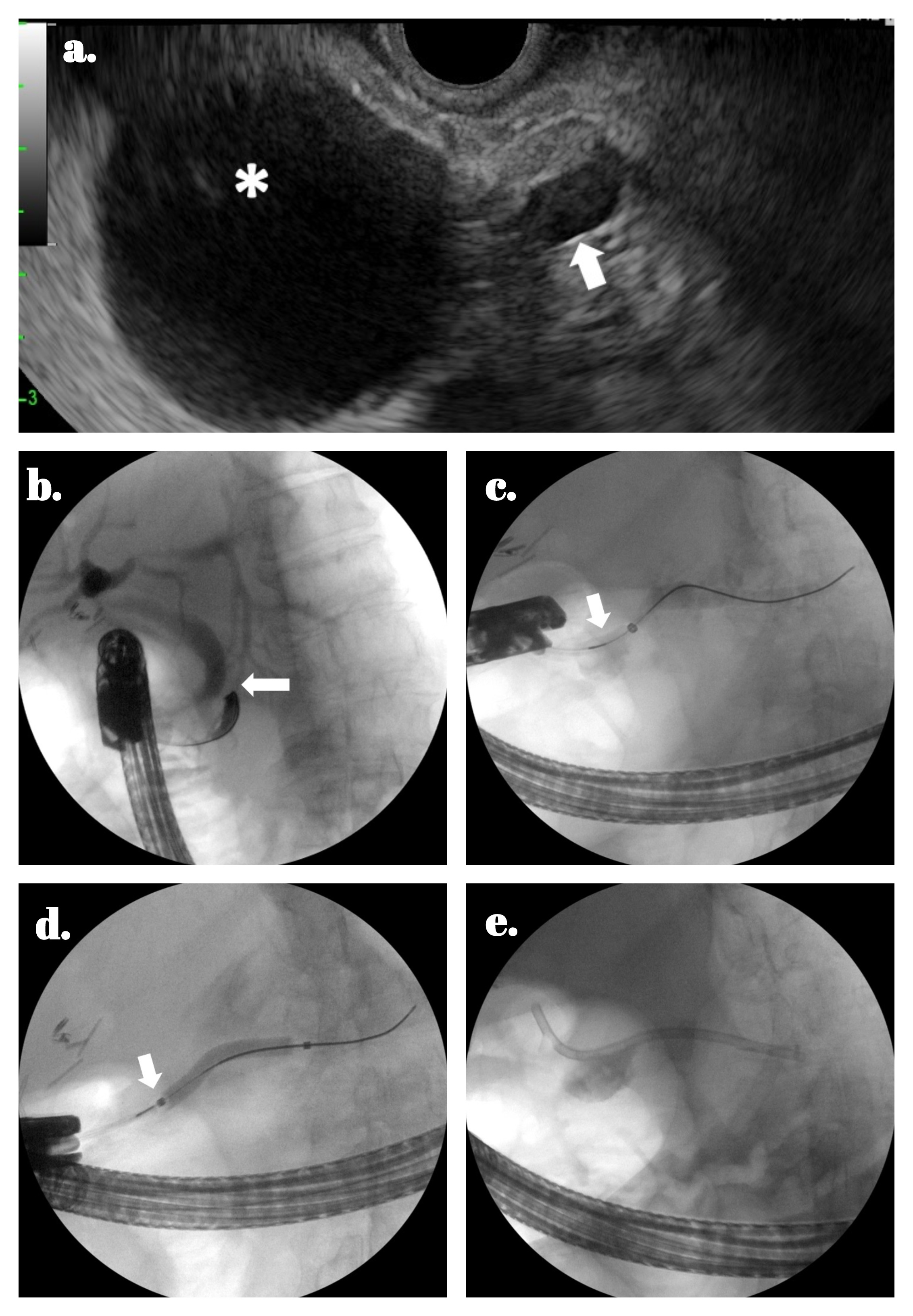