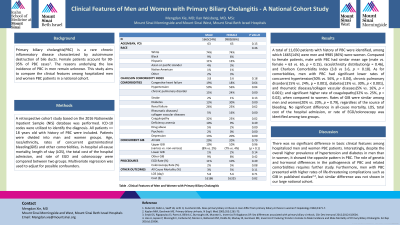 Introduction: Backgrounds: Primary biliary cholangitis(PBC) is a rare chronic inflammatory disease characterized by autoimmune destruction of bile ducts. Female patients account for 90-95% of PBC cases. The reasons underlying the low incidence of PBC in men remain unknown. This study aims to compare the clinical features among hospitalized men and women PBC patients in a national cohort.

Methods: A retrospective cohort study based on the 2016 Nationwide Inpatient Sample (NIS) database was performed. ICD-10 codes were utilized to identify the diagnosis. All patients >= 18 years old with history of PBC were included. Patients were divided into man and women groups. Age, race/ethnicity, rates of concurrent gastrointestinal bleeding(GIB) and other comorbidities, in-hospital all-cause mortality, length of stay (LOS), the total cost of the hospital admission, and rate of EGD and colonoscopy were compared between two groups. Multivariate regression was used to adjust for possible confounders.

Discussion: Conclusion: There was no significant difference in basic clinical features among hospitalized men and women PBC patients. Interestingly, despite the overall higher prevalence of hypertension and diabetes in men than in women, it showed the opposite pattern in PBC. The role of genetic and hormonal differences in the pathogenesis of PBC and related comorbidities requires further study. Furthermore, men with PBC presented with higher rates of life-threatening complications such as GIB in published studies, but similar difference was not shown in our large national cohort.