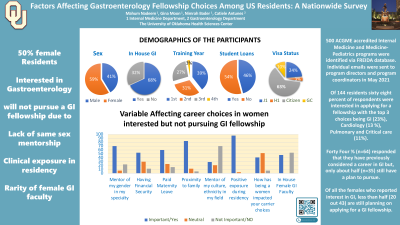 Introduction: Despite the recognition of gender parity in medicine as crucial for creating a culture of diversity and equity, women are under-represented in the field of gastroenterology (GI). From 2007 to 2019, the total number of Internal Medicine female physicians have increased from 32% to 43 %. In GI the trend has not been the same. In fact, as of 2019, only a third of the gastroenterology trainees and 18% of practicing gastroenterologists were females. Literature is scarce on factors limiting female residents from pursuing a career in gastroenterology. To address this, we designed this nationwide survey.

Methods: 500 ACGME accredited Internal Medicine and Medicine-Pediatrics programs were identified via FREIDA database. Individual emails were sent to program directors and program coordinators starting in May 2021.

Results: A total of 144 residents have completed the survey until now. Demographics are shown in the figure A. Sixty-eight percent of respondents were interested in applying for a fellowship with the top 3 choices being GI (23%), Cardiology (13 %), and Pulmonary and Critical care (11%). Notably, 44 % (n=64) responded that they have previously considered a career in GI but of those, only about half (n=35) still have a plan to pursue. Of all the females who reported interest in GI, less than half (20 out 43) are still planning on applying for a GI fellowship.

Among the factors cited by women no longer considering a career in GI are competitiveness of the fellowship, having a female mentor (70%) and exposure to GI during residency (97%) greatly impacted their career choice. Interestingly, 53% of these women didn’t have any female faculty in their GI department.

More than half of the total respondents perceive GI as not female-friendly and only a quarter believed that endoscopy may be more challenging for women. Three-fourths of the total participants agreed that there is a need for more women in GI. Having a supportive partner, paid maternity leaves, work-life balance, financial security, proximity to family, and student loans were highlighted as some of the major factors that affect career choices in women.

Discussion: Preliminary results from our nationwide survey shows that >50% females who had interest in GI will not pursue a Gastroenterology fellowship career. Major reasons identified include lack of same sex mentorship, lack of clinical exposure during residency and rarity of female GI faculty in their respective institutes. 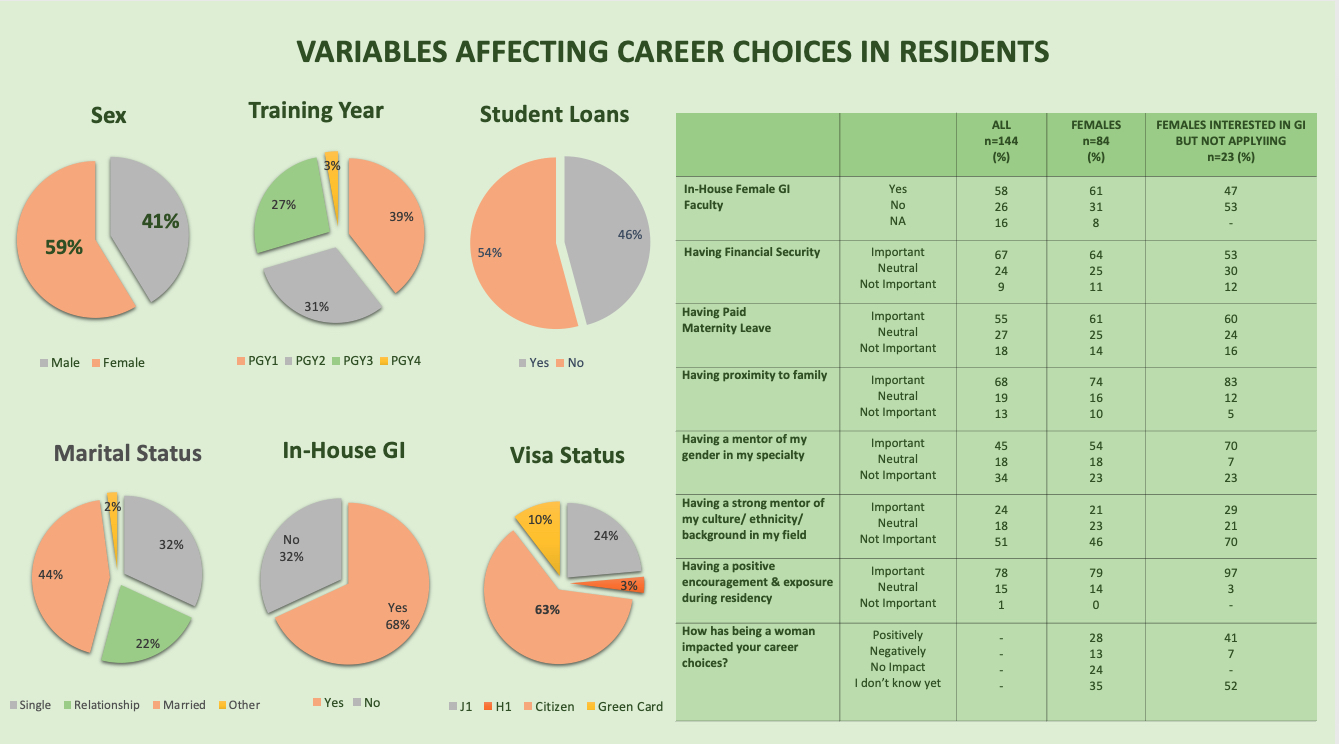 Figure: Demographic and Variables recorded in our Nationwide survey