P1014 - An Unfortunate and Rare Cause of Chronic Nausea and Vomiting: Mitochondrial Neurogastrointestinal Encephalomyopathy (MNGIE) 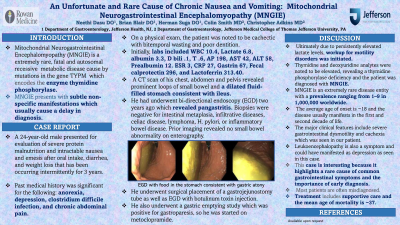 Introduction: Mitochondrial Neurogastrointestinal Encephalomyopathy (MNGIE) is an extremely rare, fatal, and autosomal recessive metabolic disease caused by mutations in the gene TYPM which encodes the enzyme thymidine phosphorylase. MNGIE presents with subtle, non-specific manifestations which usually cause a delay in diagnosis.

Case Description/Methods: A 24-year-old male presented for evaluation of severe protein malnutrition and intractable nausea and emesis after oral intake, diarrhea, and weight loss that has been occurring intermittently for 3 years. Past medical history was significant for the following: anorexia, depression, clostridium difficile infection, and abdominal pain. On a physical exam, the patient was cachectic with bitemporal wasting and poor dentition. Labs revealed: Lactate 6.8, Alkaline phosphatase 198, AST 42, ALT 58, Prealbumin 12. ESR 3, CRP 27, Gastrin 67, Fecal calprotectin 296, and Lactoferrin 313.40. A CT scan revealed prominent loops of the small bowel and a dilated stomach consistent with ileus. He had undergone bi-directional endoscopy two years ago which revealed pangastritis. Biopsies were negative for intestinal metaplasia, infiltrative diseases, celiac disease, lymphoma, H. pylori, and IBD. Prior imaging revealed no small bowel abnormality on enterography. He underwent surgical placement of a gastrojejunostomy tube as well as EGD with botulinum toxin injection. He also underwent a gastric emptying study which was positive for gastroparesis, so he was started on metoclopramide. Ultimately due to persistently elevated lactate levels, a workup for motility disorders was initiated. Thymidine and deoxyuridine analytes were noted to be elevated, revealing a thymidine phosphorylase deficiency, and the patient was diagnosed with MNGIE.

Discussion: MNGIE is a progressive, complex degenerative disease with significant morbidity. It is an extremely rare disease entity with a prevalence ranging from 1–9 in 1,000,000 worldwide. The average age of onset is ~18. Mutations in the TYMP gene lead to a deficiency in thymidine phosphorylase activity causing MNGIE. The major clinical features are severe gastrointestinal dysmotility and cachexia which was seen in our patient. Leukoencephalopathy is also a symptom and could have manifested as depression as seen in this case. This case is interesting because it highlights a rare cause of common gastrointestinal symptoms and the importance of early diagnosis. Treatment includes supportive care and the mean age of mortality is ~37.